The fundamental theorem of simulation

The Fundamental Theorem of Simulation

is equivalent to simulating

The proof is trivial.

One thing that is made clear by this theorem is that we can generate X in three ways:

I want to understand in last step,

we will sample $X$ using any method of MCMC and $U \sim U[0,1]$ and then take the sample of $X$ only which interested to find distribution for it.

Another question, Is this theorem related to latent variables?

Your question is unclear: when simulating $X\sim f(x)$, one can instead simulate$$(X,U)\sim\mathcal{U}(\{(x,u);\ 0<u<f(x)\})$$which has the joint density$$\mathbb{I}_{(0,f(x)}(u)\mathbb{I}_\mathcal{X}(x)$$and then use only the $X$ component in the simulation. For instance, here is a figure from our book depicting many realisations of such a Uniform when $f$ is the density of a Beta distribution [black dots]. The remaining dots are rejected simulations from a Uniform over a square that contains the subgraph of $f$. 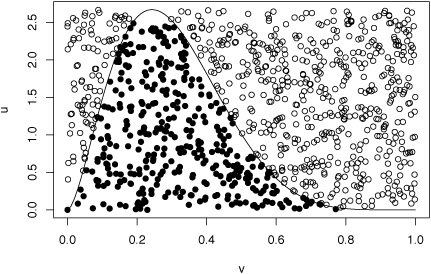 Once this new target is set, any simulation method aimed at it is valid. Like Accept-Reject in the above picture. What matters is to find an efficient simulation method. (The quote is then wrong in that $U$ is no longer $\mathcal{U}(0,1)$

As to your second question, the $U$ component in the above indeed behaves like a latent variable in the sense that $$f(x)=\int_0^\infty f(x,u)\text{d}u$$ represents the density of interest as the marginal density of a joint distribution of $(X,U)$, $U$ being "unobserved". However, latent variables are most often used in statistical settings where the joint $f(x,u)$ makes life easier, for instance allowing for an EM algorithm. In that sense $U$ is not a latent variable since this is not a statistical problem but a simulation problem. I would use "auxiliary" rather than "latent".

Not the answer you're looking for? Browse other questions tagged simulation markov-chain-montecarlo monte-carlo latent-variable marginal-distribution or ask your own question.

9
What is the equivalent for cdfs of MCMC for pdfs?
4
Two algorithms are given for rejection sampling. I can not relate these two algorithms
4
In exactly what sense do MCMC draws approximate the target?
1
Why do we draw parameters to draw from a marginal distribution that does not contain the parameters?
0
Simulation using the fundamental theorem of simulation (MATLAB)