I am trying to estimate a restricted and unrestricted version using the ARCH/GARCH framework. Specifically, I am using a GARCH(1,1) model and am assuming a normal distribution. While I am not really interested in the the conditional variance, I am interested in achieving coefficient efficiency. Two of my variables are orthogonal to all other variables in the model. The resticted version on the model is as follows: 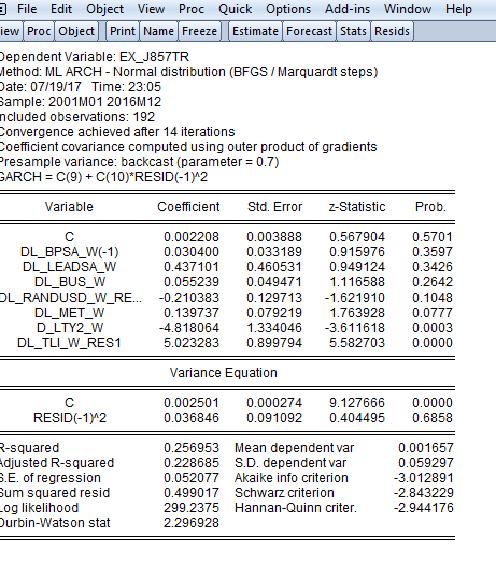 My second unrestricted version is: 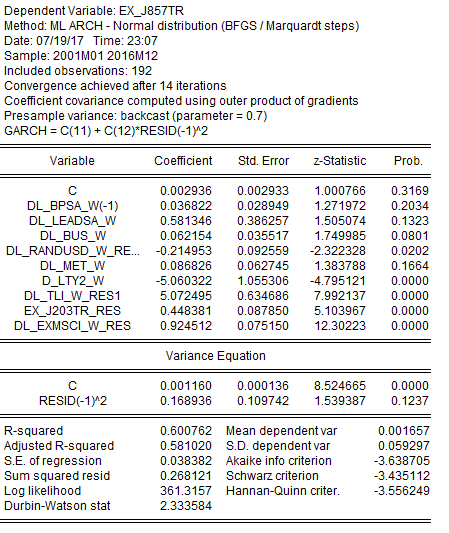 In the unrestricted model, ex_j203tr_res and dl_exmsci_w_res are orthogonal to the other factors. However, when I include these factors, the estimated coefficients change. Under OLS, this does not happen - the addition of the orthogonal factors does not impact any of the coefficient estimates.

Why is this happening under ARCH/GARCH estimation?
I am under the impression that when factors that are orthogonal are, there is be no impact on existing estimated coefficients? This seams to hold under OLS but not maximum likelihood?

Not the answer you're looking for? Browse other questions tagged regression estimation garch or ask your own question.

2
How are errors terms calculated in GARCH model by rugarch package?
0
Deciding if the (G)ARCH model is adequate, and how to fix heteroskedasticity
1
OLS + HAC std err vs. conditional mean equation from GARCH
2
When testing a hypothesis, should I keep an insignificant lag in ARMA-GARCH model?
2
Remaining heteroskedasticity even after GARCH estimation
4
GARCH estimates differ in rugarch (R) vs. EViews
1
In a GJR model, is there any interpretation attributed to half of the asymmetry parameter?