I am trying to explore the Metropolis-Hastings algorithm but I am wondering about the characteristics of this sampling method. It is known about the Metropolized independent sampling that if we designed everything well then for sure it will converge to the target when sample sizes grows to infinity according to this paper J. Liu 1995.

Suppose we designed two Markov chains and sampled in the first time using the original M-H and in the second time using the independent M-H, which chain will converge quicker under the same conditions (i.e mean by same conditions: same sample size, and the same distributions...etc ). I think that the metropolized independent should converge quicker because we sampled independent objects although the whole chain is dependent since we are using MCMC which generate repeated samples Robert & Casella 2010.

I tried to find a reference to prove or reject this but I couldn't!!

I am so sorry if there is any ambiguity or anything wrong but as I said I am trying to understand it.

Any kind of help is appreciated.

Suppose we designed two Markov chains and sampled in the first time using the original M-H and in the second time using the independent M-H, which chain will converge quicker under the same conditions

The thing with Markov chain Monte Carlo is that the convergence rate for a sampler is most dependent on the target distribution. There is not natural ordering as to whether a usual M-H sampler converges faster or slower than an Independent M-H. In addition, it also depends on the choice of proposal distributions for both the samplers.

For the second we use

I ran all four samplers for 100,000 iterations. Below are the density estimates and their comparison to the truth. 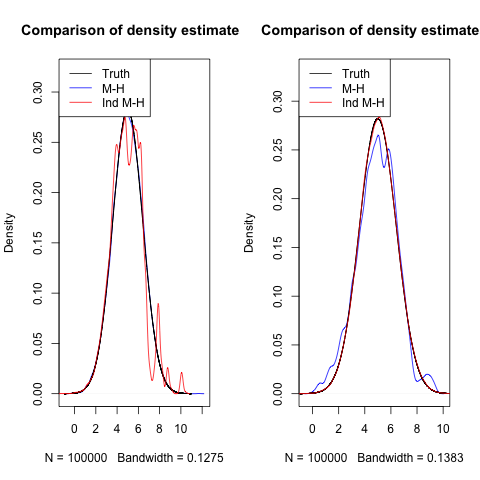 In the first plot, because the proposal distribution for Independent M-H is far from the truth, it only rarely proposes value that are good, and thus doesn't seem to converge fast.

In the second plot, the variance in the M-H proposal is so small, that it is not able to propose values far away and explore the space well, leading to slower convergence.

One could further play around with different target distributions and see how the samplers behave. It will end up being problem specific.

Both the regular M-H and independent M-H sample independent objects when they draw from the proposal. Generally, when independent M-H sampler works, it works really well. But it is very difficult to get it to work in real settings since you really need to know a low about the target distribution. You need to know where a lot of the mass is, so that you can use a proposal density centered around that mass. This can be very hard for higher dimensional problems.

Not the answer you're looking for? Browse other questions tagged probability markov-chain-montecarlo markov-process convergence metropolis-hastings or ask your own question.