So I'm conducting a logistic regression model with 'voted_trump'(1=voted for trump, 0=didn't vote for trump) as my dependent variable. My hypothesis is that opposition to political correctness ('OPC', a 1-4 ordinal scale) predicts a greater likeliness of having voted for Trump, net of all controls. This expected relationship remains significant until I add an index of conservative talk-radio consumption (where 0=no consumption, 5=listens to 5 conservative radio programs) to the model. In case it's relevant, I should note that its inclusion also trimmed the number of observations from 2400->1400. The unique effect of conservative radio on voting for Trump, however, was also insignificant. I thus constructed and tested an OPCxCR interaction term to determine their joint effects. In the end, both constituent terms became significantly positive while the OPCxCR interaction was significantly negative. Not sure how to interpret this, so would appreciate some input. Thanks in advance! 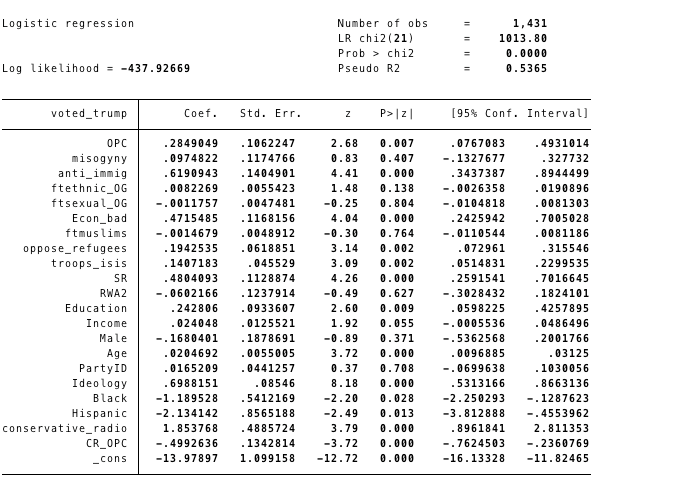 More than that can't be said unless you give the actual coefficients.

One way to visualize this is to make a table with 20 rows - one for each combination of OPC and CR - and the probability of voting for Trump. You can also graph this.

As an aside, note that you are treating OPC and CR as if they were continuous variables. This is not necessarily wrong, but you should be aware of it.

Others combinations can be calculated similarly.

This seems intuitively like a poor model. Perhaps my point about linearity is serious. You might look into optimal scaling.

Not the answer you're looking for? Browse other questions tagged logistic interaction or ask your own question.