Given a single training example $x = (x_1, x_2, x_3)$ and output $y$, the goal is to write down the "sequence of calculations required to compute the squared error cost (called forward propagation)". The hidden units $h_1,h_2$ are logistic, the output neuron f is a linear unit, and we are using the squared error cost function $E = (y − f)^2$.

This is an exercise from an old exam (not homework, but self-study). The network looks as follows: 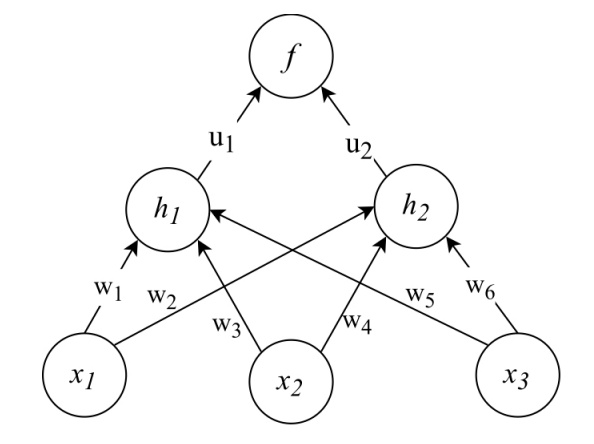 My first question is regarding the vocabulary: I am not sure what a linear unit is - is f(x) = x? Also, if I understand the exercise correctly, we only have to calculate the forward pass (?), but as an exercise for myself I am trying to derive the backward step as well.

Anyway, I would proceed as follows:

Let's take as an example the weight $u_1$

Step by step I would calculate:

Is this correct? Thanks

That looks correct. Each unit would also typically have a scalar bias term added to the weighted sum of inputs. The bias terms are learnable parameters, just like the weights. But, I don't see any mention of that in the figure, so maybe it's not part of this exercise.

Your use of the chain rule, expression for $\frac{\partial E}{\partial u_1}$, and update rule (assuming gradient descent) look correct.

Not the answer you're looking for? Browse other questions tagged machine-learning self-study neural-networks predictive-models optimization or ask your own question.

1
How to find the best input value for this simple problem?
1
Heterogenous layers in Neural Network
2
Stochastic gradient descent for neural networks with tied weights
1
Step-by-step construction of an RBF neural network
4
Backpropagation proof and usage confusion
1
sampling distribution using normal and rectangular distribution
0
How can I derive a linear model from a neural network with one hidden neuron?