I have a dataset with 53k samples and 12 predictors, divided in this way:

The dependent variable is binary (0/1) and the groups are in decreasing order of likelihood of Y=1, basically. So the distribution of Y is skewed towards 0s in the lower groups and 1s in the higher groups (for example: G1 has 12k 1s and 3k 0s).

After running a Logistic Regression on each group separately and the entire dataset, these are the coefficients and p-values for predictor P:

Now, I've never had to run a Logistic Regression on subsets of a dataset and the entire dataset, but is it possible that the coefficient is so strong and significant for the whole dataset while being insignificant in all the other groups?

My intuition is yes, because there's more data, but anyone have any ideas?

The code for the Logistic Regression is very basic:

Repeated for each group + entire dataset

When you estimate the effect of p separately within each group, that's a fundamentally different test from estimating it once across the whole dataset. In the second case, you're just looking at the main effect of p in a model that doesn't include an interaction between p and group, forcing one estimate on the whole dataset (even though your subset analyses suggest that there may indeed be an interaction between p and group).

Here are some pictures to illustrate. I'm just plotting it as though it were an OLS regression, since the underlying issue is the same (if you like, imagine the y-axis is logits if you want to think about it in terms of logistic regression).

This first plot shows the relationship between outcome y and predictor x estimated separately in each of the three groups. You can see some times it appears positive (group c), some times negative (group a), some times it looks like there's no effect at all (group b). 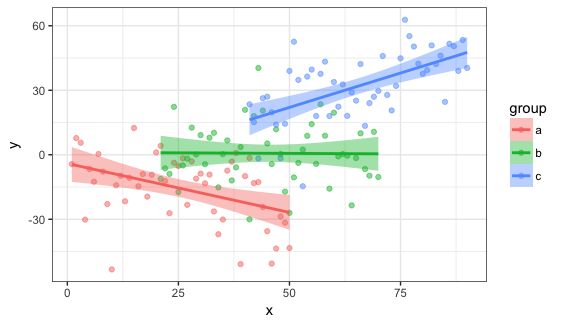 This plot shows the same data, but now the effect of x is estimated on all of the points at once. Suddenly it looks like a clear, positive effect! 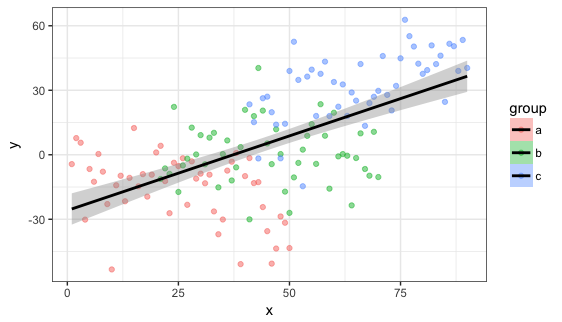 Of course, it's not always the case that effects will come out stronger when you look at the data all together vs. by group. You can just as easily see a clear effect within each group that disappears overall. The point is that you're estimating very different things when you look at the data by group vs. all together. There's no reason to expect that you should see the same pattern of results.

Here's the code to generate the above plots in R:

Not the answer you're looking for? Browse other questions tagged r machine-learning logistic modeling or ask your own question.