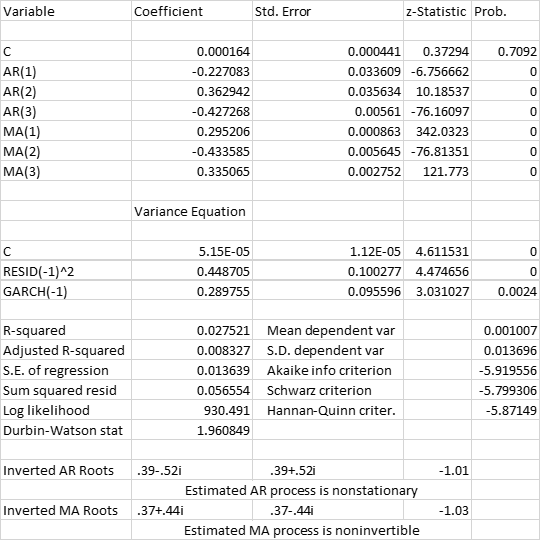 I am trying to forecast volatility out-of-sample using ARCH, GARCH, GJR and EGARCH. I used AIC to identify the ARMA and ARCH order and decided to stick with (1,1) for GARCH-type models. However, I have situation where my mean equation is either insignificant and/or non-invertible and non-stationary. The insignificance does not worry me too much, but I think the non-invertibility/non-stationarity will affect my forecast results out-of-sample. Should I remove the mean equation in the models where this happens? If no then how would this affect my forecast results out-of-sample?

Is that important when you are actually interested in forecasting volatility? Yes, it is. You either define volatility as the magnitude of deviations from the conditional mean (the level) or from zero. In both cases nonstationarity in mean will cause you trouble.

Should I remove the mean equation in the models where this happens?

you have the element $\mu_t$. It can be zero, it can be something more complicated, but it is there, it cannot just be removed. And it specifies the conditional mean of the distribution of $y_t$, the latter being $y_t \sim D(\mu_t,\sigma_t^2)$. (It has to do with the properties of a random variable. Ignoring some property of a distribution, such as the mean, does not make it disappear.)

What I suggest is trying to see why the series appears to be nonstationary and address that (by adjusting for a deterministic or a stochastic trend, a structural change or the like). Then you will have a solid ground for your volatility forecasting.

If no then how would this affect my forecast results out-of-sample?

Not the answer you're looking for? Browse other questions tagged forecasting arima garch volatility-forecasting or ask your own question.

7
Weak stationarity and ARMA-ARCH/GARCH models?
2
GARCH modelling and forecasting
1
GARCH in STATA: significant results but still volatility clustering
2
Remaining heteroskedasticity even after GARCH estimation
0
How to measure the true underlying daily volatility from daily data?
0
forecast criterion
1
In a GJR model, is there any interpretation attributed to half of the asymmetry parameter?