How far can be median, mode and mean be from each other and still be able to say that is a normal distribution?

I'm working on the Boston housing project of the udacity ML nano degree. A histogram of the data set looks like this: 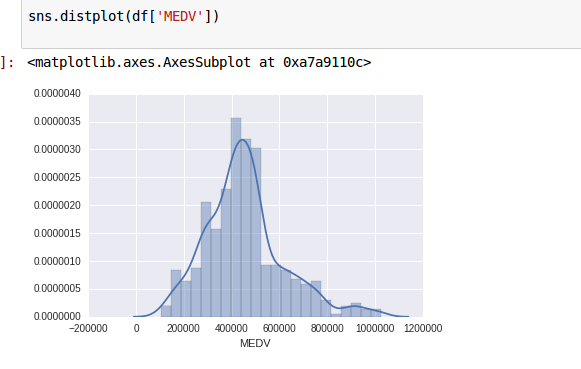 The mean, median and mode are:

Is it correct to say that it has a normal distribution?

How far can be median, mode and mean to still say that is a normal distribution?

This kind of gets things backward -- even if they were exactly equal, that's no basis on which to claim you have a normal distribution. Note that

If you're using the data I think you are, for the variable you're referring to you have discretized and censored data, so normality would be moot. We can also see that it can't be normal because house values can't be negative.

Leaving that specific data aside, what we can do instead of trying to day data come from a normal distribution when those location values are close together is to ask "how far apart would they have to be to say that they're inconsistent with normality?".

That we can do something with, at least with respect to mean and median. (The sample mode is a bit tricky with continuous distributions; it would depend on how you obtain it; I suggest we leave that issue aside.)

The distance that sample mean and median would tend to differ will depend on scale and sample size. So one way to assess that difference independent of scale would be to measure how many standard deviations they are apart.

Note that (mean-median)/s.d. is one third of the second Pearson skewness; it's also (apparently) sometimes called the nonparametric skew.

[In their case the test is asymptotic; you'd reject symmetry if $|S|>0.7555 \,Z_{\alpha/2}/\sqrt{n}$. Simulations suggest the asymptotic values aren't too bad once you get some way beyond the ends of Doane and Seward's table, I'd consider using it upward from about $n=400$ or so, though there's only about two figure accuracy in the critical values.]

No the distribution is certainly not normal. Normal distribution has a bell-curve shape and has mean = mode = median. However normal distribution is a synthetic mathematical function and no real life data will look exactly normal (even if you use random number generator to get draws from the normal distribution, even relatively small samples may not "look" normal and pass normality tests). In real-life we are interested is approximate normality, it is your decision if you want to use normal distribution as an approximation for the distribution of your data. Usually to convince yourself if the distribution behaves well, you would look at density plots, Q-Q plots, Shapiro-Wilk tests, Kolmogorov-Smirnov tests etc., but as describes in the Is normality testing 'essentially useless'? thread, those methods may misguide you and there is no fool-proof method to decide that the data "is", or "is not" normal. Moreover, in real life we often use normal approximation for data that is certainly not-normal, e.g. for survey data on Likert-type scales (bounded, discrete).

Not the answer you're looking for? Browse other questions tagged normal-distribution histogram or ask your own question.

358
Is normality testing 'essentially useless'?
85
What is the meaning of "All models are wrong, but some are useful"
2
What is meant by using a probability distribution to model the output data for a regression problem?