Help needed with intuition of eigenvalue spectrum of correlation matrix

I wish to get a better understanding of the meaning of the eigenvalues of a correlation matrix I am studying.

I have then calculated the eigenvalues for the each of the 4 different sized windows I have used and using the original index I can identify periods when I would expect the greatest amount of noise in the original time series actually have some of the smaller eigenvalue magnitudes.

What do these eigenvalues actually represent, I've read that the first eigenvalues explain the maximum amount of variance of the variables which can be accounted for with a linear model by a single underlying factor . But this means nothing to me right now, I understand variance and how it is a measure of spread but what a linear model is but I can't piece the two parts together intuitively.

Here is a sample plot of four variables in the original time series: 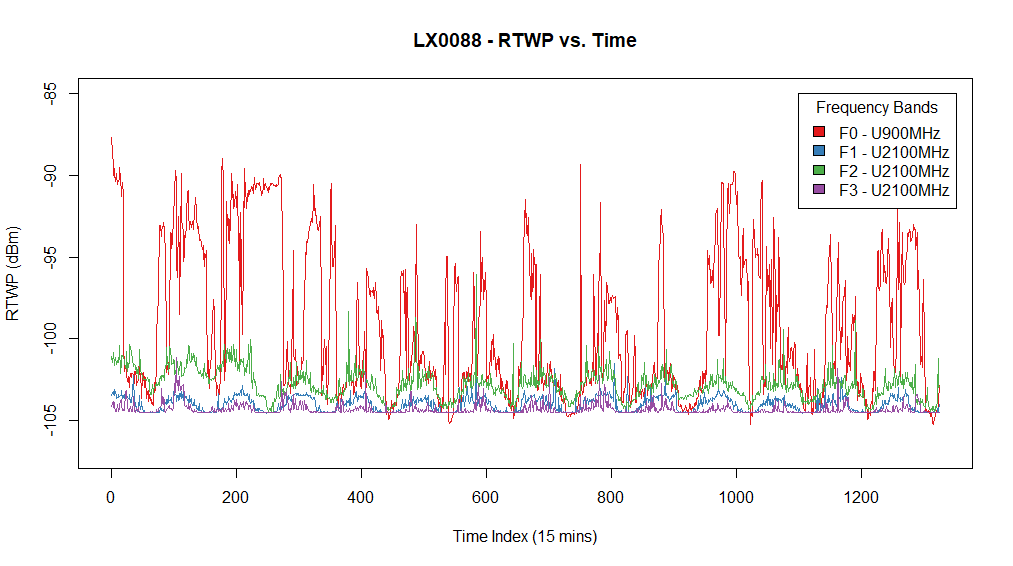 What is the translation from the time series domain to the eigenvalue spectrum? 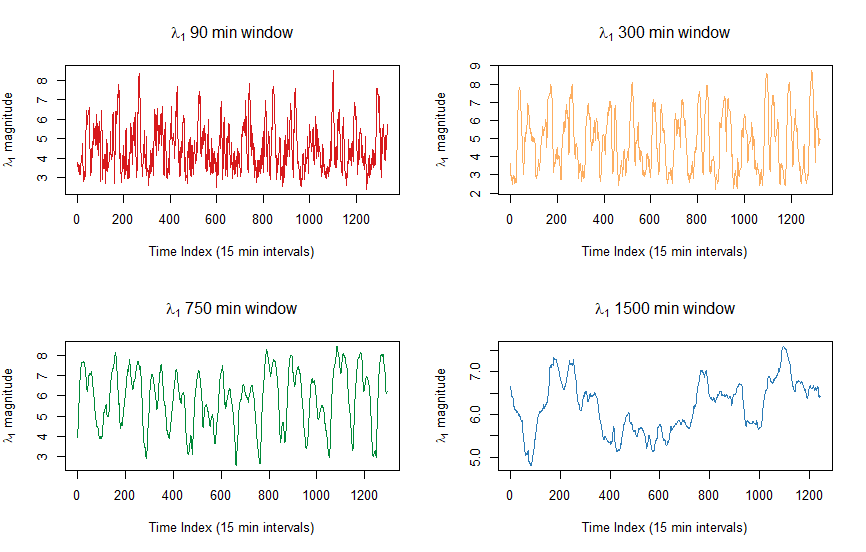 Your signals go up and down with a time period very close to a day (1440 minutes or 96 times a 15 minute time period, so roughly a period of 100 on your first graph).

This translates to variations in signals that strongly correlate around the same 'day'-variable and explains the high value for the first eigenvector.

The 1500 min window is a smoothly varying function which represents the (relative) impact of the daily noise on that particular day (as a moving average). It seems to vary between 5 and 7 or 50% and 70%. So on some days the 'total' noise was influenced by the 'daily' noise for 50/70%. Note that this compares the day-variable relatively to the total amount of noise. The increase of the percentage may be due to either more noise from the day-variable or less noise from the other causes of noise.

The other time windows are highly changing functions. In fact they have a period very close to half a day. This reflects the impact of the daily variation being variable throughout the day. Say you have the 'rise' and 'fall' in the morning and evening (2 times a day, therefore a period of half a day), then in time windows centered around those moments the variation in noise levels of the signals will correlate the most. During the night and day the signals change less due to the daily variation and then other noise effects will have more impact.

edit: one modification that you might try is scaling your RTWP for each signal by the total RTWP (individually at each time-point). The resulting time-series represent the relative noise in the signal at that time. The correlation is now not influenced by the variation of the total noise which varies throughout the day (that type of daily correlation may be just due to correlation in the activity of multiple sources of interference, rather than correlation in the sensitivity of your multiple wireless cells to a single source of interference).

Not the answer you're looking for? Browse other questions tagged time-series eigenvalues correlation-matrix or ask your own question.

3
Sliding window validation for time series
1
Univariate time series forecasting based on auto.arima
5
Similarity of time series
1
Variance and autocorrelation with missing and/or unevenly spaced data in time series
2
Correlation as a time series
3
How to estimate the largest eigenvalue of a correlation matrix from one observation of underlying data matrix?