Formula for number of weights in neural network

I'm trying to find a way to estimate the number of weights in a neural network. Let's look a simple example.

That makes total sense to me, since we see four arrows in the illustration.

I don't understand, why the output says that there are 11 weights involved, since I count 12!? Any suggestions?

The reason you're confused is the fact that function nnetar creates an autoregressive neural network and not a standard neural network. This means that the input layer nodes of the network are:

If you calculate all weights so far you'll see that you only get 8: $3 \times 2 + 2 \times 1 $. But then why does nnetar return 11 weights? This is because of the "bias" nodes, which are not really counted in the 3-2-1 network though they are part of it and do carry extra weights. There is one bias node in the input layer and one in the hidden layer which connects only to the output layer. So you have 2 weights from the input layer bias node plus 1 weight from the hidden layer bias node, that makes 3 plus 8 from before, 11 weights in total. You can learn more on this architecture from the documentation of nnetar or Hyndman's new book. 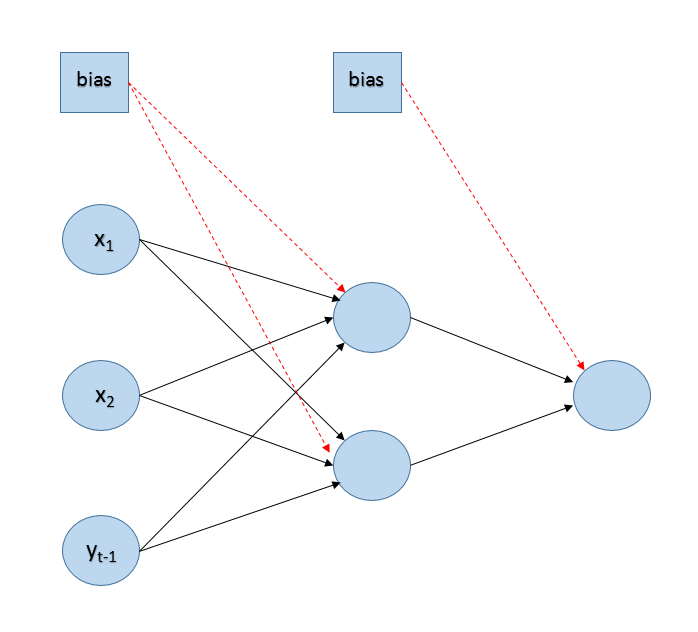 You can find the number of weights by counting the edges in that network.

To address the original question:

Not the answer you're looking for? Browse other questions tagged time-series neural-networks forecasting weights or ask your own question.

1
Neural network: two output vectors?
0
Cost function for cross entropy
2
Extracting weight importance from One-Layer feed-forward network
1
Neural network always returns same result
4
In Neural Network back propagation, how are the weights for one training examples related to the weights for next training examples?
0
Does use of ReLU activation in hidden layers a neural network for regression make it expensive (stacked) linear regression?
1
time series forecasting - can a neural network predict higher values than those seen during training?