I've tested out various feature selection methods, such as the F-test, Mutual Information and the Extra Tree (Extra Randomised) Forest Classifier (ETC) as well as PCA (which is technically a feature extraction method), with ETC being used solely for feature selection rather than as a classifier, and have subsequently performed 10-fold cross validation of my models with a combination of GridSearch and pipeline from the wonderful scikit-learn Python package, with these models being random forests, SVM, KNN and logistic regression.

Upon doing this, I found that the average AUC score for the validation sets was the highest for the models when using Extra Tree Classifier as the feature selector, with SVM performing particularly well, and the rest okay, except for logistic regression, which blatantly underperformed compared to the other models, with an average AUC for logistic regression and ETC combined of 0.4761. Weirdly enough, the best performing permutation that was captured upon doing GridSearchCV involved using $L1$ penalty, $C = 0.1$, and selected features of $n = 20$. Since thousands of permutations were performed for each model, this means that some validation AUC scores were in the range of 0.4 and 0.3, which is very unusual given that most sources online state that $0.5\leq AUC \leq 1$, which makes sense.

However, other sources do state than when $AUC<0.5$ this is due to a classification error made by the machine when executing the algorithm, and that one straightforward way to overcome this issue is by doing $1-AUC,$ whilst others state that $AUC<0.5$ indicates that the classifier model is worse than one which classifies completely at random, and this is where my confusion arises. So far I have taken the heuristic approach of subtracting the AUC from 1, but I'm very skeptical of doing this since it might be too heuristic for it to be effective. My current code for logistic regression looks as follows

As it can be seen, I have created a simple if-statement where I subtract the AUC from 1 if it is less than 0.5, and this was done for the plot of the ROC curve too, since I would be getting an inverse (or convex) ROC curve rather than a concave one. Before doing this, when inputting my test data into the function I would occasionally yield a test AUC score greater than 0.5, which resulted in a normal concave ROC curve, but mainly they were around 0.4 or as low as 0.3.

Therefore, does anybody know what could be the cause of such volatile and unusually low AUC scores for the combination of ETC and logistic regression? From what I've read online, ETC has the tendency of capturing very intricate highly non-linear relationships among variables, which might explain why logistic regression, which is naturally a linear model (?), underperforms compared to the rest. If it helps, my confusion matrix is the following: 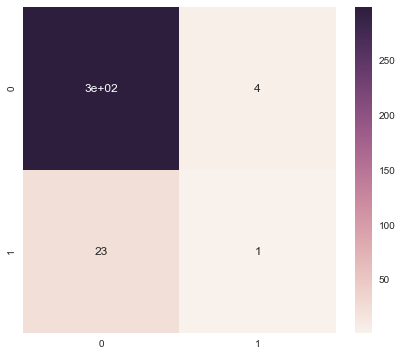 I would highly appreciate any sort of input or help by anyone.

UPDATE: Sycorax posted the following link in the comments: Can a random forest be used for feature selection in multiple linear regression? deals with this problem and describes why this might not work too well.

Similar explanation: your data/model might suffer from the Curse of dimensionality, as logistic regression is prone to fall to this curse.

Where did you define the training data?

Have you tried class_weight="balanced" for logistic regression? This might produce a different rate of misclassification.

What were the results without the RFE step?

Not the answer you're looking for? Browse other questions tagged machine-learning logistic scikit-learn roc auc or ask your own question.

56
Can a random forest be used for feature selection in multiple linear regression?
22
Does Dimensionality curse effect some models more than others?
1
Training AUC below 0.5

10
AUC in ordinal logistic regression
0
Sklearn Python - Difference in results between accuracy_score and roc_curve function output
5
What to do for AUC less than 0.5?
1
Can the ROC AUC of a total test set be larger than the AUC for any subset of some test set partition?
1
AUC-ROC interpretation for a binary classifier
2
Proper way to finding area under ROC curve (AUC)