Regression when the OLS residuals are not normally distributed

There are several threads on this site discussing how to determine if the OLS residuals are asymptotically normally distributed. Another way to evaluate the normality of the residuals with R code is provided in this excellent answer. This is another discussion on the practical difference between standardized and observed residuals.

But let's say the residuals are definitely not normally distributed, like in this example. Here we have several thousand observations and clearly we must reject the normally-distributed-residuals assumption. One way to address the problem is to employ some form of robust estimator as explained in the answer. However I am not limited to OLS and in facts I would like to understand the benefits of other glm or non-linear methodologies.

What is the most efficient way to model data violating the OLS normality of residuals assumption? Or at least what should be the first step to develop a sound regression analysis methodology?

The ordinary least squares estimate is still a reasonable estimator in the face of non-normal errors. In particular, the Gauss-Markov Theorem states that the ordinary least squares estimate is the best linear unbiased estimator (BLUE) of the regression coefficients ('Best' meaning optimal in terms of minimizing mean squared error)as long as the errors

Notice there is no condition of normality here (or even any condition that the errors are IID).

The normality condition comes into play when you're trying to get confidence intervals and/or $p$-values. As @MichaelChernick mentions (+1, btw) you can use robust inference when the errors are non-normal as long as the departure from normality can be handled by the method - for example, (as we discussed in this thread) the Huber $M$-estimator can provide robust inference when the true error distribution is the mixture between normal and a long tailed distribution (which your example looks like) but may not be helpful for other departures from normality. One interesting possibility that Michael alludes to is bootstrapping to obtain confidence intervals for the OLS estimates and seeing how this compares with the Huber-based inference.

Edit: I often hear it said that you can rely on the Central Limit Theorem to take care of non-normal errors - this is not always true (I'm not just talking about counterexamples where the theorem fails). In the real data example the OP refers to, we have a large sample size but can see evidence of a long-tailed error distribution - in situations where you have long tailed errors, you can't necessarily rely on the Central Limit Theorem to give you approximately unbiased inference for realistic finite sample sizes. For example, if the errors follow a $t$-distribution with $2.01$ degrees of freedom (which is not clearly more long-tailed than the errors seen in the OP's data), the coefficient estimates are asymptotically normally distributed, but it takes much longer to "kick in" than it does for other shorter-tailed distributions. 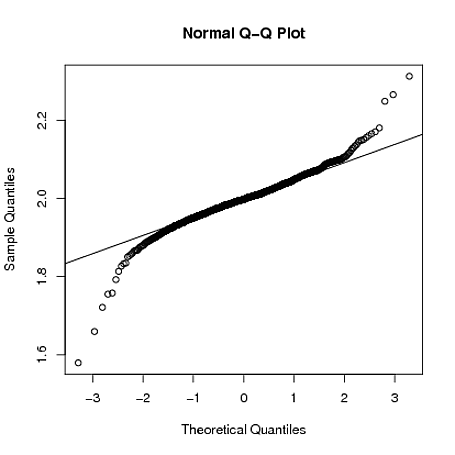 I think you want to look at all the properties of the residuals.

If it is just 1 and it is due to heavytails or skewness due to one heavy tail, robust regression might be a good approach or possibly a transformation to normality. If it is a non-constant variance try a variance stabilizing transformation or attempt to model the variance function. If it is just 3 that suggests a different form of model involving that covariate. Whatever the problem bootstrapping the vectors or reiduals is always an option.

For non-normal conditions one would sometimes resort to robust regression, especially using the links to methods.

In order to present the context for non-normality it may help to review the assumptions for linear OLS regression, which are:

As this answer illustrates, simulated Student's-$t$ distributed $y$-axis errors from a line lead to OLS regression lines with confidence intervals for slope and intercept that increase in size as the degrees of freedom ($df$) decrease. For $df=1$, Student's-$t$ is a Cauchy distribution and the confidence intervals for slope become $(-\infty,+\infty)$.

It is arbitrary to invoke the Cauchy distribution with respect to residuals in the sense that when the generating errors are Cauchy distributed, the OLS residuals from a spurious line through the data would be even less reliable, i.e., garbage in---garbage out. In those cases, one can use Theil-Sen regression regression. Theil-Sen is certainly more robust than OLS for non-normal residuals, e.g., Cauchy distributed error would not degrade the confidence intervals and unlike OLS is also a bivariate regression, however in the bivariate case it is still biased. Passing-Bablok regression can be more bivariate unbiased, but does not apply to negative regression slopes. It is most commonly used for methods comparison studies. One should mention Deming regression here, as unlike the Theil-Sen and Passing-Bablok regressions, it is an actual solution to the bivariate problem, but lacks the robustness of those other regressions. Robustness can be increased by truncating data to include the more central values, e.g., random sample consensus (RANSAC) is an iterative method to estimate parameters of a mathematical model from a set of observed data that contains outliers.

[Edit: Usually, residuals (the model minus the fitted function values) are plotted as versus the corresponding $x$-values. This will not show OLS bias. However, plotting residuals versus their sequence number: first, second, third, etc., that is, equidistantly, A.K.A as a bijected set, DOES show the bias]

Then, if the bijected OLS residuals have a non-zero slope, the problem is bivariate and the OLS regression of the data will have a slope magnitude that is too shallow, and an intercept that is too large in magnitude to be representative of the functional relationship between $x$ and $y$. In those cases, the least error linear estimator of $y$-values indeed would still be from OLS regression, and its R$^2$-value will be at a maximum possible value, but the OLS regression line will not represent the actual line function that relates the $x$ and $y$ random variables. As a counter example, when, as occurs among other problems in a time series with equidistant $x$-values, OLS of the raw data is not always inappropriate, it may represent the best $y=f(x)$ line, but is still subject to variable transformation, for example for count data, one would take the square root of the counts to convert the errors for Poisson distributed error to more normal conditions, and one should still check for non-zero slope of residuals.

Macro (jsut above) stated the correct answer. Just some precision because I had the same question

The condition of normality of the residuals is useful when residuals are also homoskedastic. The result is then that OLS has the smallest variance between all of the estimator (linear OR non-linear).

if 1-5 verified, then OLS has the smallest variance between all of the estimator (linear OR non-linear).

if only 1-4 verified, then by Gauss-Markov, OLS is the best linear (only !) estimator (BLUE).

My experience is completely in accord with Michael Chernick. Not only at times does applying a data transformation makes the modeling error normally distributed, it can also correct heteroskedasticity.

Sorry, but to suggest otherwise like gather an insane amount of data, or employ less efficient robust regression methods, is misguided, in my opinion, having practice this science/art.

Not the answer you're looking for? Browse other questions tagged regression least-squares residuals assumptions normality-assumption or ask your own question.

2
Regression on a non-normal dependent variable?
362
Is normality testing 'essentially useless'?
75
What are some of the most common misconceptions about linear regression?
33
Why do political polls have such large sample sizes?
29
In layman's terms what is the difference between a model and a distribution?
21
Assumptions of multiple regression: how is normality assumption different from constant variance assumption?
28
What should I check for normality: raw data or residuals?
22
Choosing between $z$-test and $t$-test
22
Confirming the distribution of residuals in linear regression
15
Why are rlm() regression coefficient estimates different than lm() in R?
See more linked questions