Comparing densities of two partitions of a population

I have a population with age range 0-6 years old. A survey asked various "Choose all that apply" questions and I'd like to compare the age densities for each subset (Did choose option X, Did Not choose option X), to look for age ranges where significant differences appear to have occurred.

The reported ages are actually discrete, since people round to the nearest month below about two-years-old and to the nearest half year after that. (I'm using R's density to come up with the monthly density from 0-6, to try to smooth through the many zeros that would occur for months at higher ages.) The overall age density is: 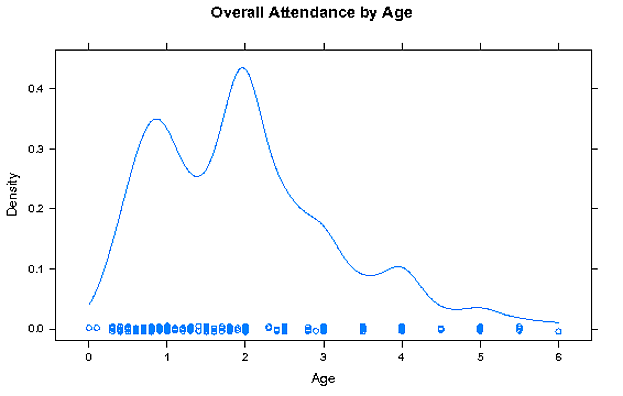 My first attempt was to take the ages from each partition (Checked, Not-checked), calculate a density, and do a Chi-squared (or K-L divergence or Hellinger distance) test between the two subset densities to determine statistical significance. If the differences between the two densities seem statistically and (non-subject-matter-expert) actually significant, I plotted the two densities on a single graph. For example: 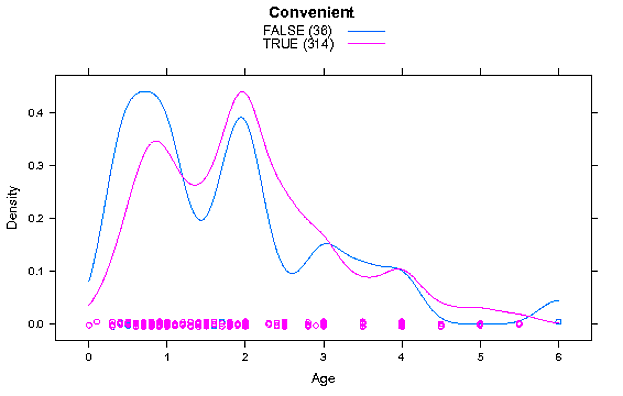 But then I thought that there is an overall age density for the total population and perhaps I should "normalize" the two subset densities by dividing each by the overall density. Or maybe I should subtract the overall density from each. Those would show more of a "deviation from the whole" kind of graph. (In the example, the TRUE's much more closely reflect the overall population since they make up the vast majority: 314 out of 350.)

Dividing by the density or subtracting it may turn out impractical, because it depends how you estimate it. By default R uses a smoothing window that often looks nice but which is by no means the only one that makes sense.

Actually this is why I would take the raw data and perform a Wilcoxon test to identify shifts in the distribution. You could also do a KS test if you are interested in change of spread or other features.

Not the answer you're looking for? Browse other questions tagged survey pdf or ask your own question.

1
Plotting two densities on the same graph in R
0
Comparing and visualizing densities of two samples in R (2)
2
How to get statistical evidence of similar/different evolution from PDFs
5
Multivariate probability density - Help with an integral
16
How to calculate average length of adherence to vegetarianism when we only have survey data about current vegetarians?