Pearson correlation between a variable and its square

Here is my R code to get familiarised with Pearson's correlation. I generate values of $X$ from 1 to 100, then find the correlation between $X$ and $X^2$:

I get this result :

My question is: what exactly does the $r$ coefficient quantify? Does it only quantify the closeness of the relationship between $X$ and $Y$ variable to a linear relationship ?

Or is it also suited to quantify the intensity of a relationship between $X$ and $Y$ broadly speaking (whether this relationship is close to linearity or not)?

My last question is: are there other correlation test better suited than Pearson's test to quantify the intensity of the relationship between two given variables when the kind (linear, quadratic, exponential, etc.) of this relationship is not known a priori or is Pearson's test sufficient to do this kind of job?

By an argument analogous to that on the Math SE thread, we have:

To seven decimal places, this is $r = 0.96824583$, even though the relationship is quadratic rather than linear. Now you have taken a discrete uniform distribution on $1, 2, \dots, n$ rather than a continuous one, but for the reasons explained above, increasing $n$ will produce a correlation closer to the continuous case, so that $\sqrt{15}/4$ will be the limiting value. Let us confirm this in R:

That correlation of $r=0.9682458$ may sound surprisingly high, but if we inspected a graph of the relationship between $X$ and $X^2$ it would indeed appear approximately linear, and this is all that the correlation coefficient is telling you. Moreover, we can see from our table of output from the corn function that increasing the value of $n$ makes the linear correlation smaller (note that with two points, we had a perfect linear fit and a correlation equal to one!) but that although $r$ is falling, it is bounded below by $\sqrt{15}/4$. In other words, increasing the length of your sequence of integers makes the linear fit somewhat worse, but even as $n$ tends to infinity your $r$ never becomes worse than $0.9682\dots$. 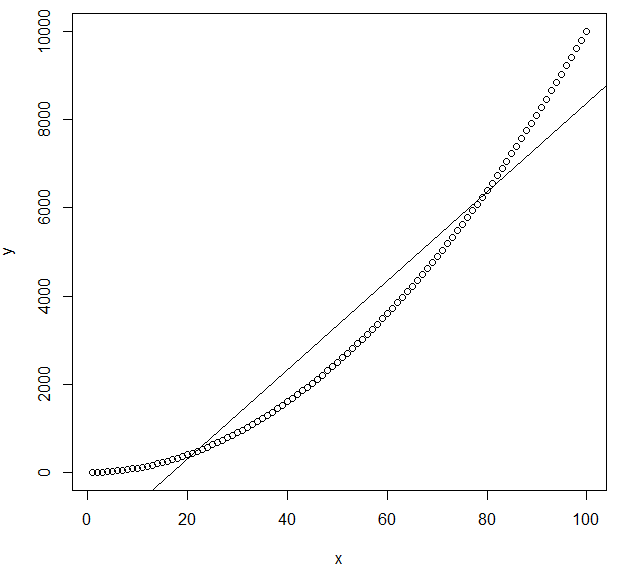 Perhaps visually you are still not convinced that the correlation looks as strong as the calculated coefficient suggests — clearly the points are below the line of best fit for low and high values of $X$, and above it for intermediate $X$. If it can't capture this quadratic curvature, is the line really such a good fit to the points?

We had a large $R^2$ so our correlation is large also. This is the sense we mean when we state that "a Pearson correlation near $\pm 1$ indicates the linear fit is good" — not that our straight regression line captures the true nature of the relationship between $X$ and $Y$, and so there is no curvature and no discernible pattern in the residual variation, but instead that the line provides a good approximation to the true relationship, and that the proportion of residual variation (i.e. that part left unexplained by the linear model) is small.

Note that had you chosen a discrete uniform on e.g. $-100, -99, \dots, 99, 100$ and rescaled that to being between $[-1,1]$ and you would have found a covariance and correlation of zero, as happens in the linked Math SE thread. There is neither an increasing nor decreasing relationship. 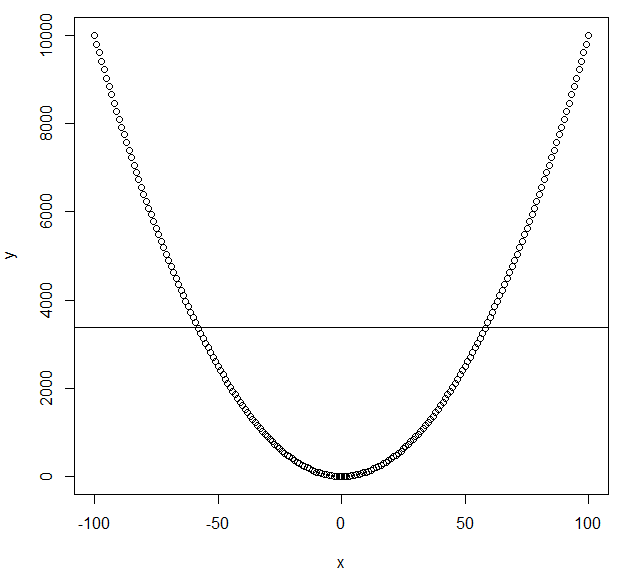 As an exercise to think through, what would be the correlation between $-1, -2, -3, \dots, -n$ and its squares? You can easily write some R code to confirm your guess.

If all you care about is the existence of an increasing or decreasing relationship, rather than the extent to which it is linear, you can use a rank-based measure such as Kendall's tau or Spearman's rho, as mentioned in Glen_b's answer. For my first graph, which had a perfectly monotonic increasing relationship, both methods would have given the highest possible correlation (one). For the second graph, which is neither increasing nor decreasing, both would give a correlation of zero.

The Pearson correlation measures the closeness to a linear relationship. If $X$ is positive, then the correlation between $X$ and $X^2$ is often fairly close to 1.

If you want to measure the strength of monotonic relationship, there are a number of other choices, of which the two best known are the Kendall correlation (Kendall's tau), and the Spearman correlation (Spearman's rho)

I'd add that looking at the correlation of non-random values isn't necessarily where I'd start - it can be useful when exploring edge cases, however.

For the Pearson correlation you may find it useful to consider playing about with the rho and n values here:

(In particular, you might try varying rho from close to -1 up to close to 1)

You may also find these discussions of correlation useful for getting a handle on what correlations do and don't do:

Does the correlation coefficient, r, for linear association always exist?

How would you explain covariance to someone who understands only the mean?

How to choose between Pearson and Spearman correlation?

Not the answer you're looking for? Browse other questions tagged correlation linear pearson-r or ask your own question.