Does a stepwise approach produce the highest $R^2$ model?

Note that this question is purely theoretical, i.e. we are not debating whether a high $R^2$ value is optimal, whether it leads to overfit, etc. 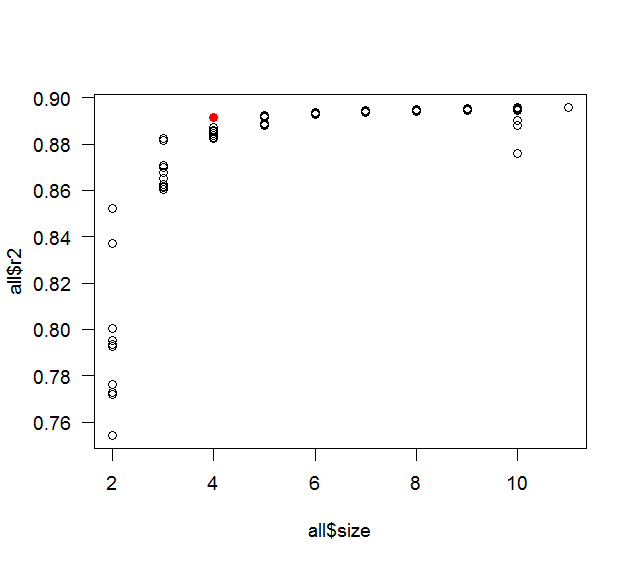 whuber wanted the thought process: it is mostly a contrast between curiosity and laziness. The original post talked about having 10 predictor variables, so that is what I used. The 0.9 correlation was a nice round number with a fairly high correlation, but not too high (if it is too high then stepwise would most likely only pick up 1 or 2 predictors), I figured the best chance of finding a counter example would include a fair amount of collinearity. A more realistic example would have had various different correlations (but still a fair amount of collinearity) and a defined relationship between the predictors (or a subset of them) and the response variable. The sample size of 100 was also the 1st I tried as a nice round number (and the rule of thumb says you should have at least 10 observations per predictor). I tried the code above with seeds 1 and 2, then wrapped the whole thing in a loop and had it try different seeds sequentially. Actually it stopped at seed 3, but the difference in $R^2$ was in the 15th decimal point, so I figured that was more likely round-off error and restarted it with the comparison first rounding to 5 digits. I was pleasantly surprised that it found a difference as soon as 15. If it had not found a counter example in a reasonable amount of time I would have started tweaking things (the correlation, the sample size, etc.).

If you really want to get the highest $R^2$ you have to look (as @Michael said) at all subsets. With a lot of variables, that's sometimes not feasible, and there are methods for getting close without testing every subset. One method is called (IIRC) "leaps and bounds" and is in the R package leaps.

However, this will yield very biased results. p-values will be too low, coefficients biased away from 0, standard errors too small; and all by amounts that are impossible to estimate properly.

Stepwise selection also has this problem.

I strongly recommend against any automated variable selection method, because the worst thing about them is they stop you from thinking; or, to put it another way, a data analyst who uses automated methods is telling his/her boss to pay him/her less.

If you must use an automated method, then you should separate your data into training and test sets, or possibly training, validating, and final sets.

Not the answer you're looking for? Browse other questions tagged r-squared stepwise-regression or ask your own question.

3
Assessing the effect of adding a variable using stepwise forward logistic regression using Stata?
2
using stepAIC of MASS package to select variables with a significance level of 5% in R project
4
Stepwise regression seems better than LASSO, why?
8
What exactly is “stepwise model selection”?
0
Why stepwise feature selection method do not perform well when there is a large number of explanatory variables
0
Interpreting the order that predictor variables are added to a stepwise multiple linear regression model
18
Stepwise AIC - Does there exist controversy surrounding this topic?