For the group variance parameters there is not much information in the dataset. I'm using the default rstanarm/stan_lmer priors. 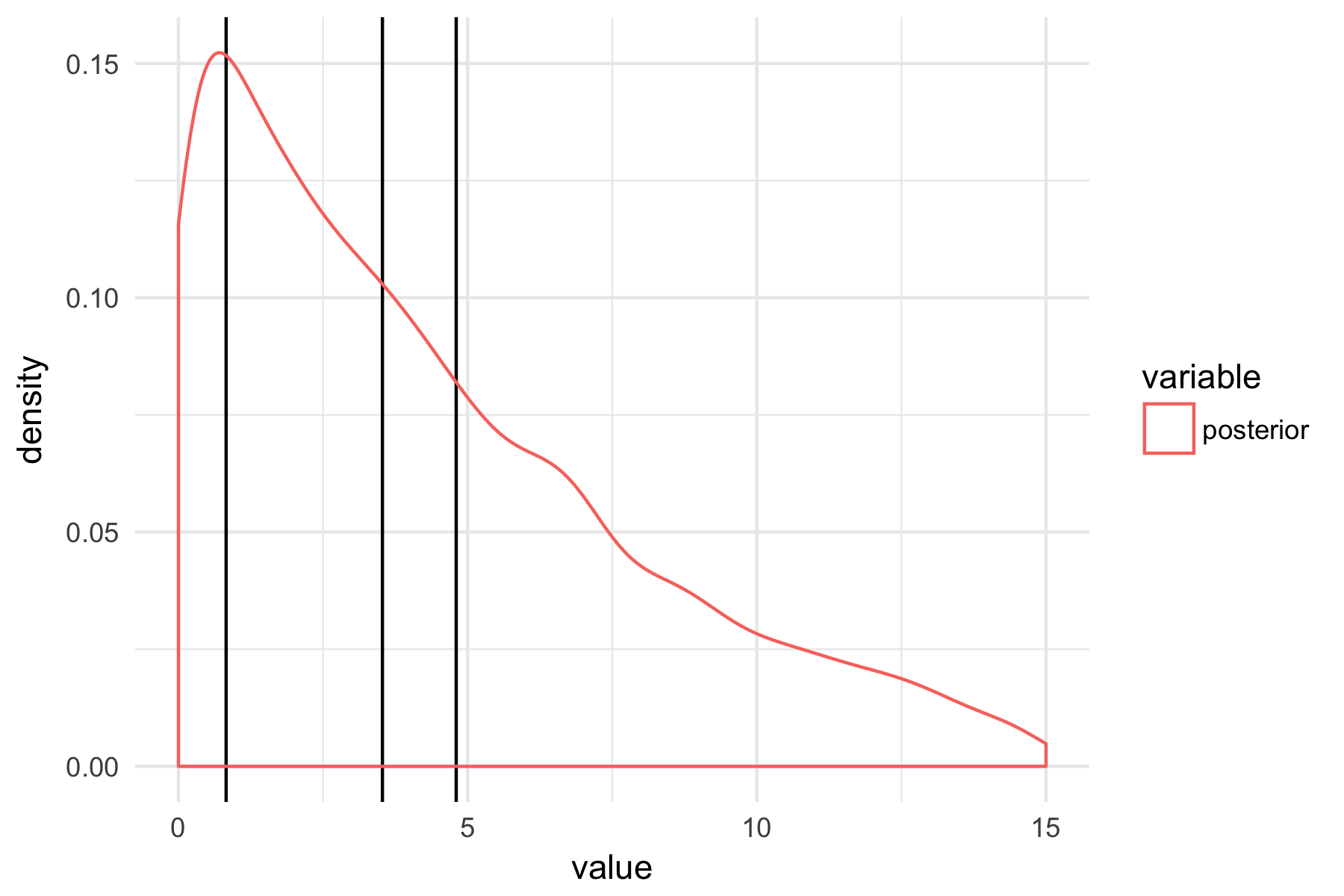 My question is: given the posterior is so skewed, does it still make sense to report the mean of this parameter (or the ICC calculated from all the variance parameters, which is also skewed). The black lines in the figure show the mode (peak density), median and mean (from left to right).

I realise that no single statistic can adequately summarise the posterior, and will report the posterior density plot but I'm trying to get some intuition for how the different estimates would be interpreted. For example, would the mode here be overly-conservative because the prior location was zero and variance estimates are constrained to be >0?

EDIT: Many thanks for the comments, which have helped clarify somewhat. Thanks also for pointing out that I should calculate the ICC from the draws — I was doing this, but didn't make this clear in my question which only referred to the variance parameter. The problem remains though because the posterior for the ICC is similarly skewed.

Thanks to Ben for highlighting the different loss functions implied. This led me to these two pages on Bayes estimators and median unbiased estimators which expanded on that point. It also made it clear that, although appealing based on the posterior density plot, the mode is not as straightforward to interpret as it might seem.

It's very interesting to hear that the mode is most analogous to the MLE because in this case the mode is closest to previous estimates from the literature, which were mostly based on MLE estimators. My temptation to simplify to a single statistic is driven by the desire to simplify the story for a non technical audience, but it's obvious that the real story here is that that we know less than we previously thought.

Browse other questions tagged bayesian stan or ask your own question.

91
If mean is so sensitive, why use it in the first place?
34
What is the difference between "mean value" and "average"?
20
Should the mean be used when data are skewed?
11
Explaining Mean, Median, Mode in Layman's Terms
3
If the mean and median underestimate the true central tendency, why use them?

11
Given a 10D MCMC chain, how can I determine its posterior mode(s) in R?
1
Skewed posterior distribution on constrained parameter space for Bayesian inference of MCMC. Advice on what to do?
1
Comparing posteriors distributions between models
7
Under the 0-1 loss function, the Bayesian estimator is the mode of the posterior distribution
3
Bayesian models: Bayesian t-test on effect posterior against 0 as index of effect existence
1
In estimating a posterior mean, should one use the entire density or the HPDI?