1) Without going to the detail of the mathematical formulas, can someone give some intuitive explanations about how and why the standard error of a model coefficient is associated to the residual variance?

2) Given formula (1), it seems that if I have a wider range of predictor $x$ (relative to $\bar{x}$), or larger number of samples $n$, the estimated SE of $\beta $ decreases. Intuitively why?

3) If we look at my question from another perspective: if I randomly simulate a number of samples using a fixed relationship $y=3+2x+\epsilon$ where $\epsilon$ follows a normal distribution $N(0,\sigma)$, and apply a simple linear regression. How does the only randomness in my data generation process (i.e. $\sigma$ for $\epsilon$) end up in the uncertainty (or randomness,SE) of the coefficients? I mean when I simulate the data, there is no uncertainty in my model coefficients.

When you look at data that has noise about a linear relationship, there's a variety of population lines that are consistent with the data -- lines that could reasonably have produced that data: 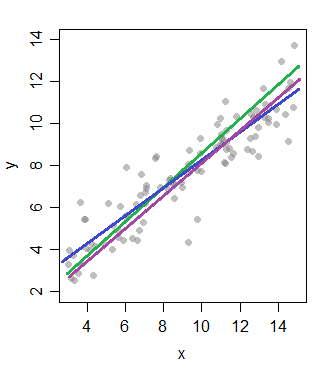 The three marked lines are each plausible population lines -- the observed data might fairly easily have resulted from any of those lines (as well as an infinity of other lines near to those).

But if we reduce the standard deviation of the error term: 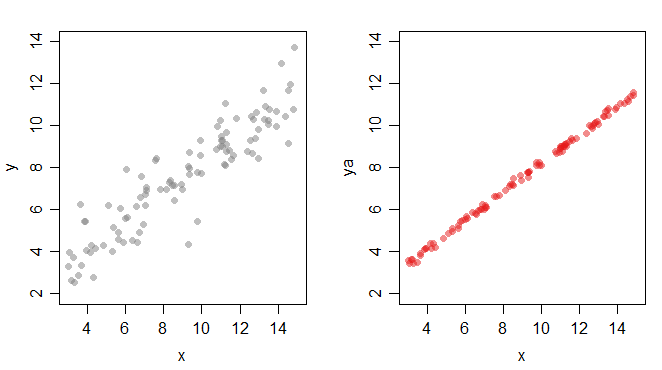 Or look at it this way: if I simulate 50 samples like the left hand (grey) points (all with the same coefficients and with the larger $\sigma$), then the coefficients of the fitted regression lines will vary from sample to sample. If I then do the same with the smaller $\sigma$, they vary correspondingly less.

Here we plot slope vs intercept for each of 50 samples of size 100, for large and small $\sigma$: 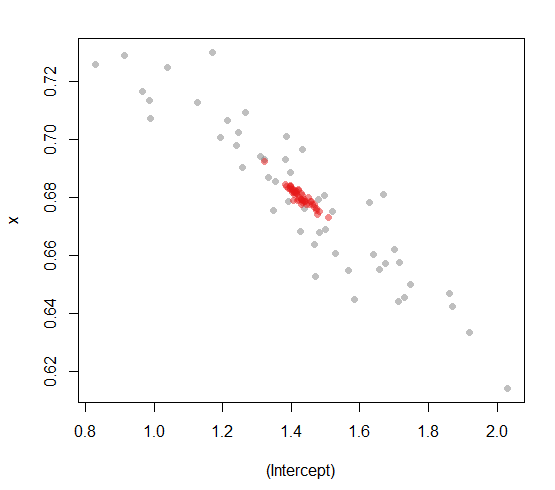 and indeed we see that the second set of points (fitted coefficients) vary much less. If you do this with many such samples, it turns out that the typical distance of the points from the center in any direction is proportional to $\sigma$.

How does larger spread of $x$'s make the standard error smaller?

Consider these two plots, where I have split my larger noise sample into points close to the x-mean and points further away (which makes the standard deviations of the x's relatively small and large): 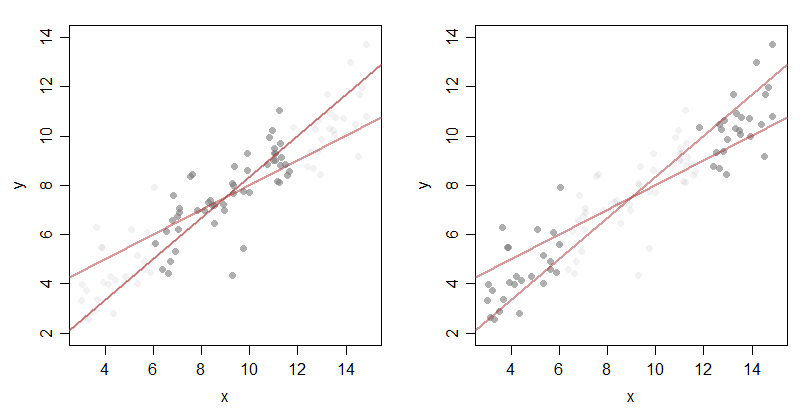 and consider just the slope for now.

Looking at points in subset from the center half of this large-$\sigma$ data set, we can see that there's a wider range of slopes that might have produced that data than could reasonably have produced the outer-half of the values -- the spread of points about the population line is relatively wider compared to the spread of the x's, so there's more "wiggle room" for the slope if the x-spread is narrow.

Not the answer you're looking for? Browse other questions tagged regression estimation standard-error or ask your own question.