I'm developing a Genome-Wide Selection Screening using a statistic called D’2IS or Dvalue. I have an experimental distribution of 70,411,837 Dvalues and a null empirical distribution of the same size. To account for the multiple testing problem I calculated the false discovery rate (FDR) for every experimental Dvalue (Dexp) as

I did not use methods to estimate FDR from p-values such as the Benjamini-Hochberg procedure since I found at bibliography that are only suitable if an analytical null model is available. With only an empirical null model, it will be necessary the estimation of p-values in an intermediate step. This could provide too pessimistic or too optimistic p-values, and in turn, lead to biased FDR values (Strimmer, 2008). Instead, obtaining the FDR directly from both experimental and null distributions (as specified above) seems a faster and more reliable procedure on this situation (Noble, 2009).

For my study three FDR threshold levels were set as FDR <= 0.15, 0.1 and 0.05. The problem comes for the most strict level, since the non-monotone behaviour of the FDR arises around this FDR level: 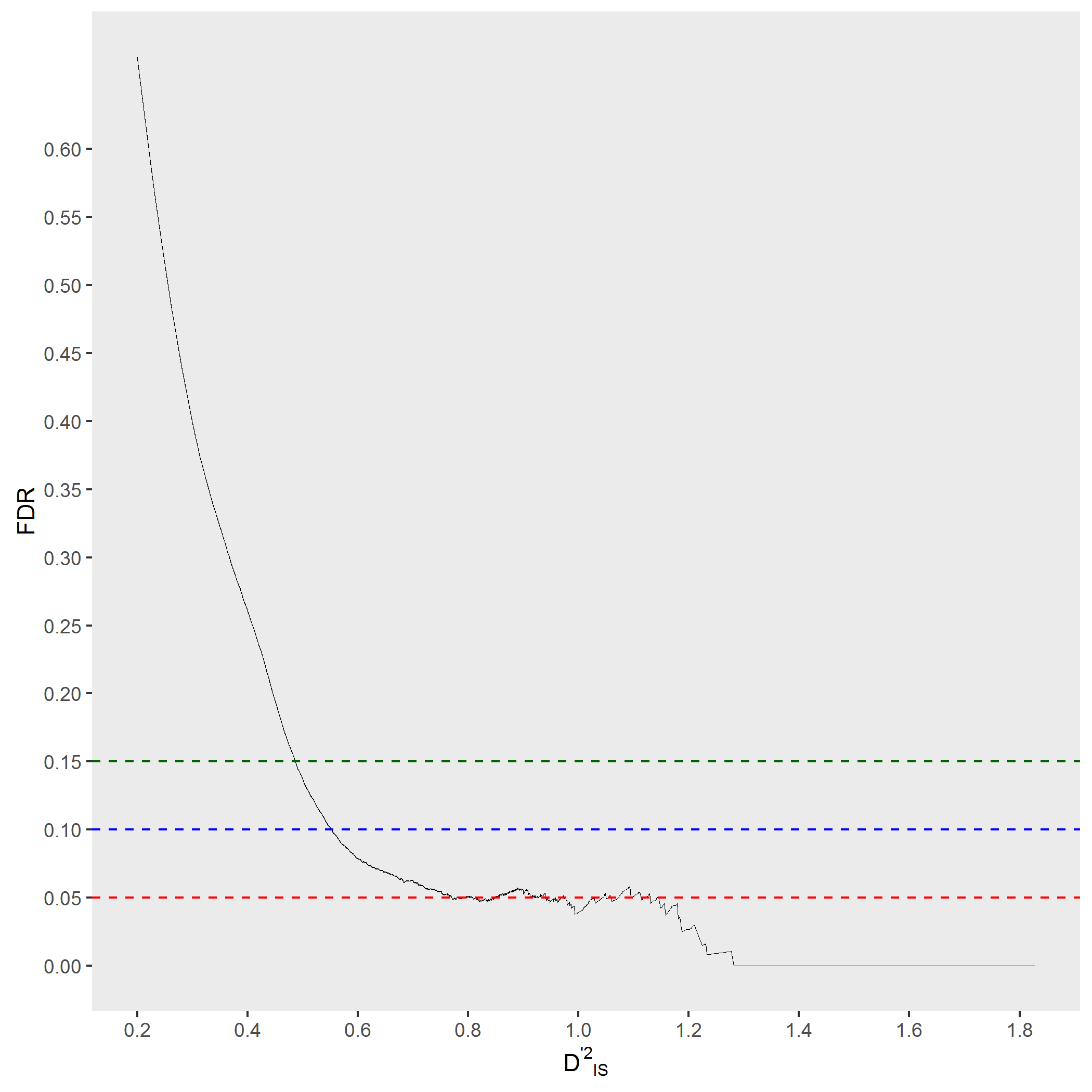 I know there are methods to achieve monotone FDR values. However, the processing of p-values and/or other parameters subtracted from the data is mandatory in most of them. Therefore:

How I interpret the FDR?

Should I take the minimum Dvalue to achieve FDR <= 0.05 as a threshold? I know that Storey defined the q-value as the minimum FDR attained at or above a given statistic value, but the algorithm proposed by Storey to obtain q-values needs intermediate steps to obtain p-values (Storey, 2003).

Does anyone know a method to achieve monotone FDR values without a theoretical null distribution?

I don't think it's an issue that your FDR is non-monotonically decreasing over $D$ values , why should it be? You have an empirical null, and only two parameters you're playing with. It's bound to jump around a little, and the trend is reasonable, I would say to just do as you suggest and take the minimum $D$ s.t. $\text{FDR} \leq 0.05$.

I do have some issue with this approach though, can you provide any other citation for this simple estimate of FDR? I've never seen it before, and it seems a bit too naive to me.

In your method from Noble 2009, he defines the FDR as $s_{null}$ the number of events from the empirical null which rise above the significance threshold divided by the number of events from the real data which rise above the threshold. My interpretation of this is that he is using the empirical null to create an estimator of the number of false positives, therefore saying that $s_{null}$ estimates $V$ (in and of itself I don't necessarily have a problem with this, but I do not think it is a trivial result, and I have not seen it reproduced elsewhere, so I would like to see a formal proof that it is true). Assuming that this is okay (and I'm not totally sure that it is), he goes forward and estimates $V+S$ with the number of positives from the actual data, because this implicitly contains both true and false positives. Dividing these two, he obtains an estimate of the FDR.

There's a problem with this, because FDR is not defined as $\frac{E[V]}{E[V+S]}$, but rather as $E \left[ \frac{V}{V+S} \right]$, which is not a trivial difference. In fact, Storey found that these are only the same when all tests are independent, which is why Sun et. al 2006 only proved stratification for independent tests. So by separately estimating $V$ and $V+S$ (and assuming both are correct!), his FDR estimate is only conservative to the case of independent tests, and will overestimate it. Isn't this the problem you were looking to avoid in the first place?

Personally I think that working with the $P$ values and using an established approach like Storey's $q$ value (as you mentioned) would serve you much better. They do rely on an analytic null distribution, yes, but Strimmer's critism was only of mis-specified null distributions. Do you have evidence that your null $P$ values do not follow $U(0,1)$? If you don't have strong evidence to support the fact that your null is not uniform, I would go with Storey or BH FDR estimates, which will be much more well known and much easier to defend to reviewers (and easier for you too!).

Not the answer you're looking for? Browse other questions tagged hypothesis-testing biostatistics false-discovery-rate or ask your own question.