I performed NMDS (using nmds() in the R package Ecodist), and then added change vectors to my ordination.

The resulting colored NMDS ordination (with change vectors) looks like this: 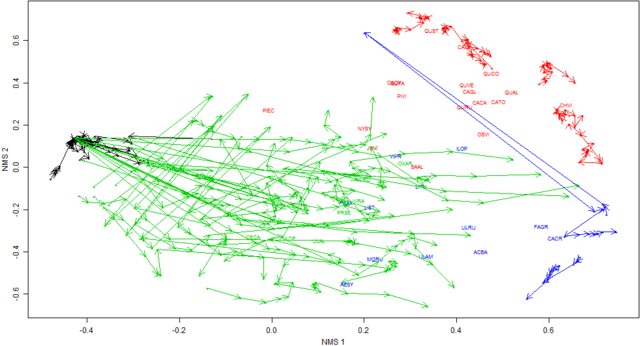 So if you'll notice, the forest plot in the bottom right corner changes minimally in all but a single year. In that year, the NMDS point is drastically different than in all other years -- it's located all the way toward the top of the NMDS output plot.

Normally, I would see this trend and assume something drastic happened that year. I would assume that the plot's overall species characteristics matched the plots represented by red dots on the top more so than the plots associated with blue dots toward the bottom of the ordination graph in that one given year.

When I actually examine the raw data for this forest plot in the years leading up to, including, and after the massive shift in NMDs space, I find that basically nothing changed between years (especially between the drastic change year and the sampling years immediately before and after).

So I know that NMDS isn't perfect and can get stuck in "local" minima etc etc ... However, after running 1000 ordinations, I would think my results would be robust enough to avoid such issues. But maybe it's still possible?

Lastly, I have re-run this ordination a hand-full of times (each time with slightly different input), but each time some plot seems to have a weird "outlier " point that doesn't make sense like above. So I'm beginning to think maybe this is something that I won't be able to eliminate or account for.

Browse other questions tagged multivariate-analysis interpretation anomaly-detection multidimensional-scaling or ask your own question.

5
Identifying clusters/ordination based on correlation statistic?
2
interpreting NMDS ordinations that show both samples and species
4
Identifying a changed spending pattern
5
Determine rate of change in dissimilarity (distance)?
0
How to interpret ANOSIM results correctly for the two plots