I've heard that ratios or inverses of random variables often are problematic, in not having expectations. Why is that?

The title is the question. I am told that ratios and inverses of random variables often are problematic. What is meant is that expectation often do not exist. Is there a simple, general explication of that?

I would like to offer a very simple, intuitive explanation. It amounts to looking at a picture: the rest of this post explains the picture and draws conclusions from it.

Here is what it comes down to: when there is a "probability mass" concentrated near $X=0$, there will be too much probability near $1/X\approx \pm \infty$, causing its expectation to be undefined.

Instead of being fully general, let's focus on random variables $X$ that have continuous densities $f_X$ in a neighborhood of $0$. Suppose $f_X(0)\ne 0$. Visually, these conditions mean the graph of $f$ lies above the axis around $0$: 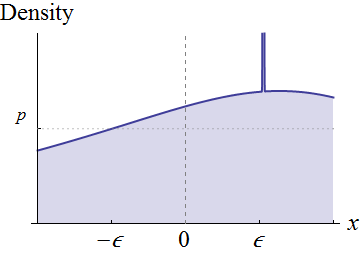 The continuity of $f_X$ around $0$ implies that for any positive height $p$ less than $f_X(0)$ and sufficiently small $\epsilon$, we may carve out a rectangle beneath this graph which is centered around $x=0$, has width $2\epsilon$, and height $p$, as shown. This corresponds to expressing the original distribution as a mixture of a uniform distribution (with weight $p\times 2\epsilon=2p\epsilon$) and whatever remains.

In other words, we may think of $X$ as arising in the following way:

($I$ is the indicator function.)

We're done now, because this fact about $S$ implies the expectation is undefined. Compare the integrals involved in computing the expectation of the positive part of $1/X$, $(1/X)_{+} = \max(0, 1/X)$:

(This is a purely geometric argument: every integral represents an identifiable two-dimensional region and all the inequalities arise from strict inclusions within those regions. Indeed, we don't even need to know the final integral is a logarithm: there are simple geometric arguments showing this integral diverges.)

Incidentally, the same argument shows that when $X$ has probability concentrated on one side of $0$, such as any Exponential or Gamma distribution (with shape parameter less than $1$), then still the positive expectation diverges, but the negative expectation is zero. In this case the expectation is defined, but is infinite.

Let's offer a "dissenting" view:
Ratios and inverses of random variables can be fine in the following sense:

On the contrary, it is products of random variables that appear to not lead to recognizable distributions that often.

Not the answer you're looking for? Browse other questions tagged probability distributions random-variable expected-value ratio or ask your own question.