I am working through an obesity dataset for a project I'm involved in, and I wanted to run a fairly simple multivariate linear regression on the data. What I was interested in is the correlation between income and education on obesity. In R, I ran two version of the model:

I am wondering what an intuitive explanation/interpretation of these results is; that is, why is education not significant in (I) but is significant when the interaction term is added in (II)? I have attached a screenshot of the results from the two runs. 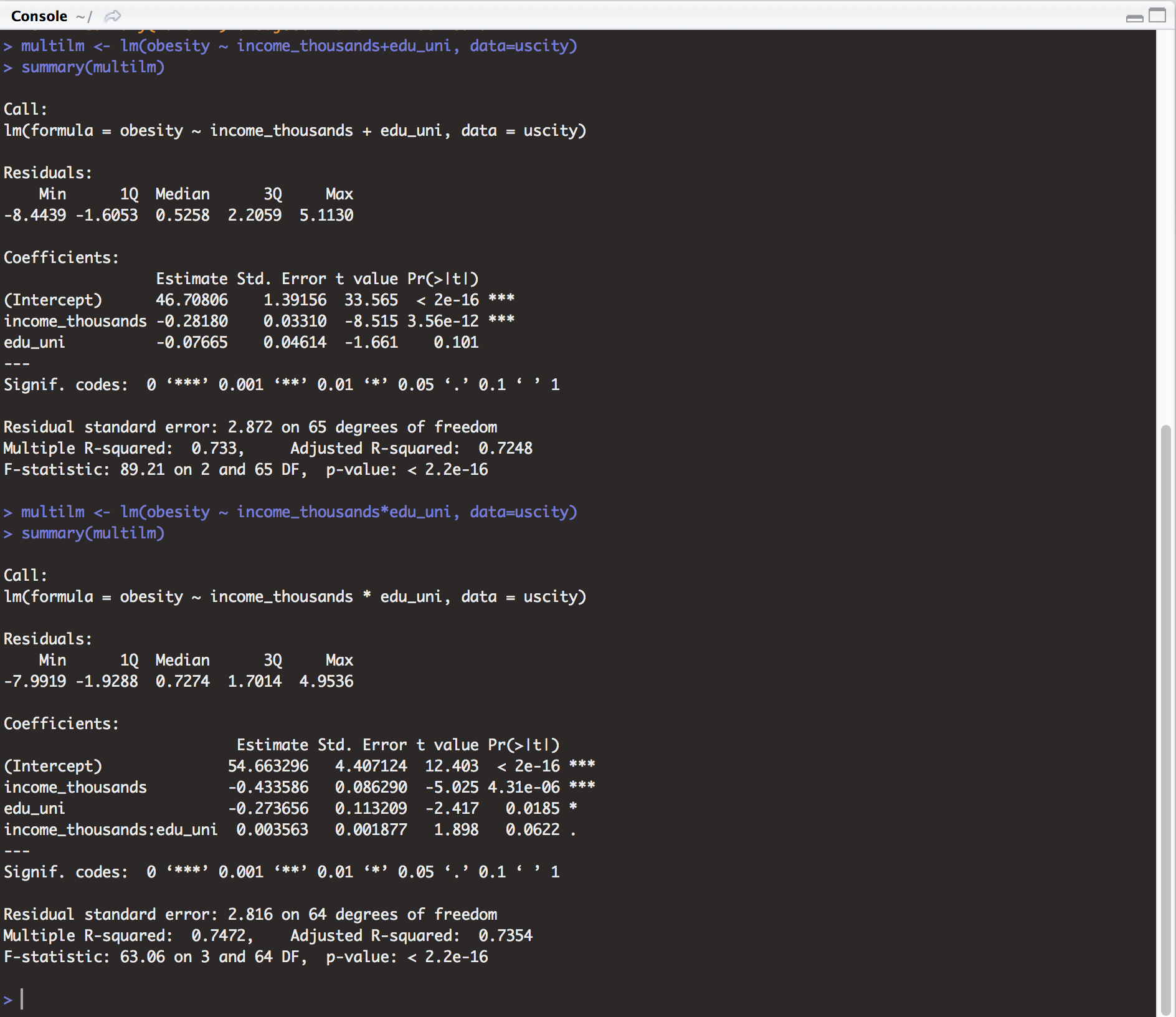 I will assume that you already understand the basic principles of multiple regression. In particular, I assume you already understand that all the regression coefficients will change when you add a new predictor variable to a regression, unless the new variable is uncorrelated with the old variables. So I won't spent time on that and will concentrate specifically on the type of interaction model that you have fitted.

Any variation on this scenario is possible. Even if the interaction isn't quite strong enough to be statistically significant itself, it nevertheless can easily soak up enough variability to push a previously borderline main effect to become significant.

One possible explanation in your case is that the original linear regression might be underestimating slightly the obesity for cities that are simultaneously above average for both income and education. The original linear regression predicts a reduction in obesity with both income and education, but this trend might perhaps taper off for cities with both variables high, and that would lead to this sort of underestimate. It might be that either income or education need to be high to get the obesity reduction but that having both high doesn't give a further reduction. In this scenario, the interaction term would get a positive coefficient to pick up this effect at high levels of both variables, but then the coefficients of the original variables would have to become more negative to compensate for the collinear interaction term in the main body of the regression. The original variables would therefore become more significant. The results you show are consistent with this scenario.

Note that this is an essentially nonlinear phenomenon. If obesity depended on income and education in a purely linear fashion, then these effects are not possible.

It is not true that you need to include the interaction term in the model simply because income and education are themselves correlated. The multiple regression arithmetic already accounts for correlations. In fact the type of model you have fitted: $$E(y) = \beta_0 + \beta_1x_1 + \beta_2x_2 + \beta_3 x_1x_2$$ is one that generally should be avoided when $x_1$ and $x_2$ are continuous covariates. It makes sense to try nonlinear terms, but including the product term without either of the square terms very seldom makes sense. To check whether $x_1$ and $x_2$ have a nonlinear relationship with $y$, it would be reasonable to try a quadratic response surface. But to fit that, you need the quadratic terms as well: $$E(y) = \beta_0 + \beta_1x_1 + \beta_2x_2 + \beta_3 x_1x_2+\beta_4x_1^2 +\beta_5x_2^2$$ You could then use an anova approach to test whether the quadratic regression is a worthwhile improvement over the linear regression.

When you fit in interaction model ~A*B in R with factors A and B, the interaction model takes into account all possible combinations of the factors A and B. Unfortunately the A*B formula doesn't do this when A and B are both continuous covariates. In that case A*B just adds a single product term, which accounts for only a small part of the possible bivariate effects. Despite the terminology in R, this should not truly be considered to fully represent possible ``interactions'' between the covariates.

Not the answer you're looking for? Browse other questions tagged regression interaction interpretation multivariate-regression or ask your own question.

19
Does adding more variables into a multivariable regression change coefficients of existing variables?