If a sample of percentage results from 200 different populations has been transformed using the arcsine square root method how should the z scores of this transformed data be calculated?

The method used by a colleague is below. However I feel there is an issue with this in particular the standard error applied as, in examples where the denominator of the original percentage is particularly high for each population, almost every observation could be outside of the 95% (z>1.96 or <-1.96). $$ z = 2\sqrt n (\arcsin\sqrt{𝑟/𝑛} - \arcsin\sqrt p) $$ Where the observed proportion had numerator $r$ and denominator $n$, and $p$ was the mean proportion. The standard error in this case was $s = 1⁄(2\sqrt n)$.

The arc sine square root transformation, sometimes called angular, feeds on proportions between 0 and 1. It has various minor virtues, as it often pulls in skewed tails with consequences both for summarizing distributions and for modelling.

(Why percents are mentioned here at all is not clear. On a purist view, 0 and 100% are just other ways to write 0 and 1, but not all software takes that line, so that to get a display of numbers like 0 and 100, you often have to multiply by 100. Conversely, if you have values between 0 and 100, then you must divide by 100 before you apply this transformation.)

There are at least two levels to this question. First, we can confirm that z-scores, meaning (value $-$ mean) / sd, will typically differ according to whether they are calculated from original data as proportions or from transformed data. This is inevitable, as the transformation is nonlinear, as is shown by plotting arc sine square root versus original.

Second, what is the interest or use here of z-scores at all, because that will drive which version is in some sense deemed better? If it's useful that z-scores be approximately symmetrically distributed, then those calculated from transformed values may be preferable. But they are just linear scalings of the transformed values.

This paper is helpful and provocative, despite its rather graceless title:

As minor entertainment, here is a sample of proportions from a skewed distribution on a normal quantile plot. As both the original and the transformed scale are bounded, we don't expect either distribution to be normal, but plotting data in this way is still useful. 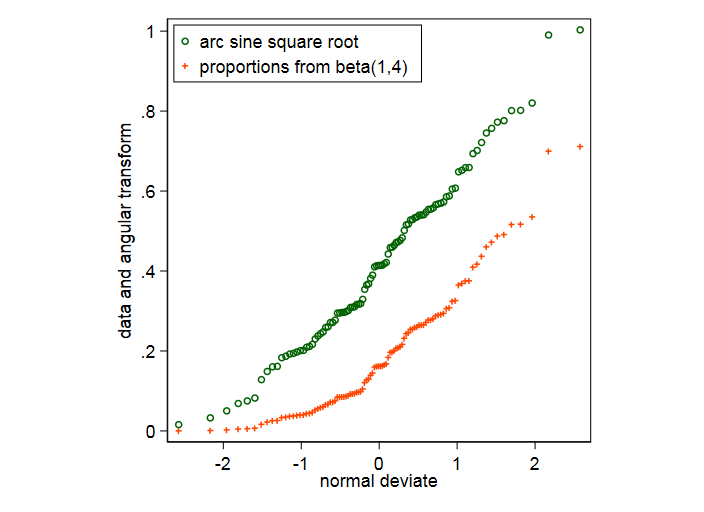 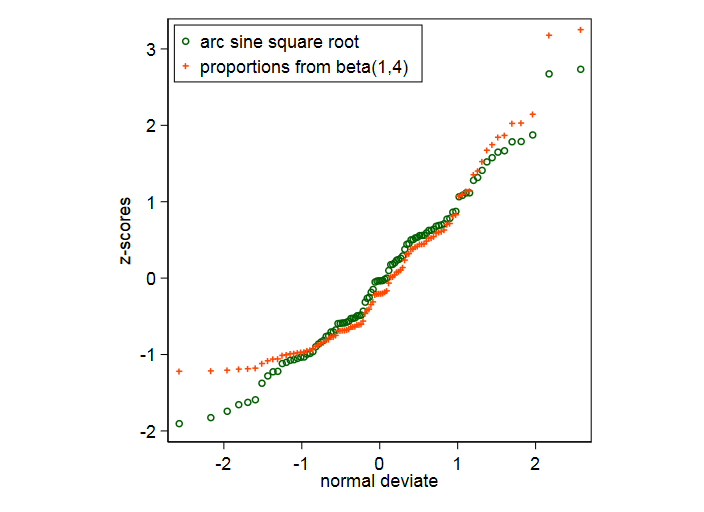 For completeness, here is the Stata code used. People accustomed to other software should be able to translate freely.