Alright, I posted this same question over at MSE, https://math.stackexchange.com/questions/2395394/solving-ptrue-of-finding-counterpart-pairs-in-2-sets-with-constraints-involvin,

I had a bounty on it for 100 and a user named Vincent told me he had solved it, and that it would just take a day or two to write out. During that day or two, the bounty expired...and he mysteriously disappeared with the solution...and
I havn't heard from him at all . I do not know if those events were causally correlated or just correlated. It's been over ~11 days now...so I'm concluding my question over there is dead and gone. Hence, why I've gone all out with 200 bounty on this one.

Regardless, given his questions over there in the comments I tried to be very specific about what I'm asking here (hence the very long subscripts, heh).

I actually need to try to figure out a means of doing this without generating simulations...and/or then using those generated simulations as a sample for the larger population...and then just extrapolate via a few tests to make sure I can "safety make those assumptions."

It's more about understanding the relationship and patterns of ALOT of questions like this one (there are many varieties) and correlating them to any biological reasoning or mechanism. That's why I want to know how to do it, if its possible.

I apologize for the lack or incorrect usage of formal notation. Did my best.

Regardless, here is my question.

a, c, g, and t do not represent anything quantifiable. They only represent a quality.

As stated more generally above, and more specifically down below:

In the end, everything comes down to the placement of $a$, $c$, $g$, and $t$ within constraints I'll define shortly.

and we'll be using 2 instances of $W$, $W_1$ & $W_2$ which are not exclusive of each other in any context, nor are they exclusive/equal when the same instance is repeated in the same or a different set/array/etc.

They are more like placeholders for a position which you're trying to find the counterpart to.

If I use $W_2$ or $W_1$ and then use it again multiple times, each time it takes on a value which is assigned actually only by you.

We'll make 8 individual instances of these paired arrays and then store them into an array, $ArrayTop$ aka $ArrT$

You can also reference the items in the array from their order via $ArrT_1,ArrT_2...etc.$ if needed.

Now, we'll make 16 more individual instances of these paired arrays and then store them into another array, $ArrayBottom$ aka $ArrB$. However, we'll start $Wa_x$ at 9.

If, given $ArrT$ & $ArrB$ and these constraints,

Every time one of these 4 letters is used in:

To clarify further, a letter acquires points for it's $W_1$ and separately for its $W_2$.

Find the number of all possible scenarios for the placements of $$a,t,g,\; and\; c$$ where, for each item in $ArrT$, two items in $ArrB$ contain the respective counterparts of $W_1$ and $W_2$ from that item in $ArrT = TRUE$.

Also, the total # of possible scenarios if you want, although that's somewhat easy to figure out.

To Summarize: My question is

1) What is the answer you come up with.

Any questions, let me know.

I have included a picture to provide the context for what this is for and where it comes from to hopefully help resolve any confusion.

One very important thing I need to stress here and which can cause confusion with this picture is the fact that there are actually a few symmetries with very low probabilities to occur especially in tandem between the two halves (pending you're looking for them). I will say that this is our genetic code for everything on earth...so that's kind of cool but the question I'm asking has absolutely nothing to do with symmetry and only the presence of things in the top group that then have their counterparts in the bottom regardless of their location in the "horizontal" plane of the group. The mathematical explanation should hopefully communicate that though.

Ignore the upper left part of the picture and any row that is the "3rd row" in either of the groups. (Contains R, Y, H, N, and 2 instances of G) 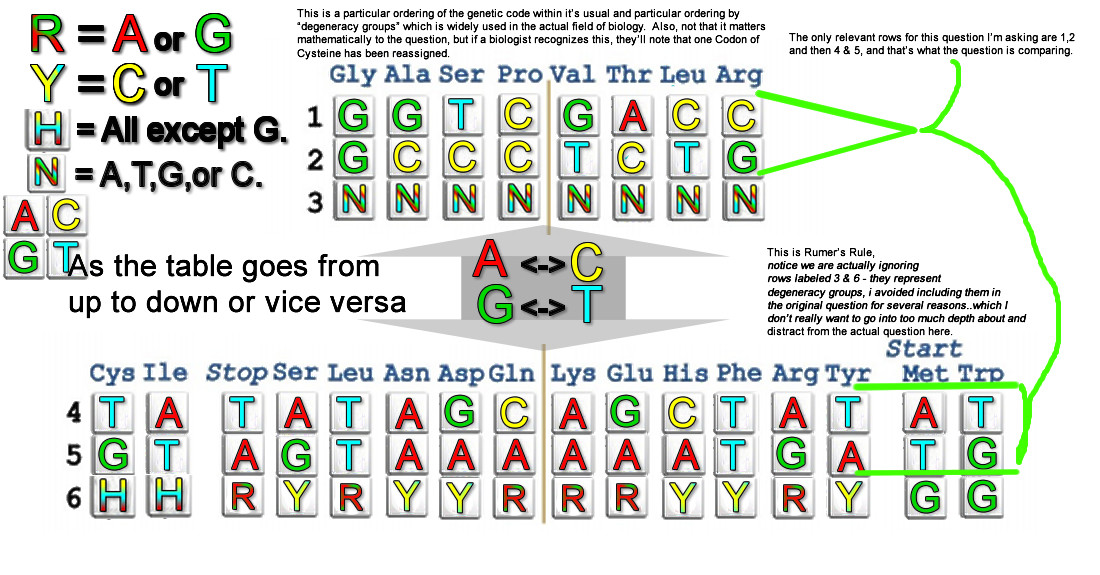 Now that we are at stats.stackexchange I can say a bit more about the first line of that answer, namely that it is more of a counting problem than a probability question. Probabilities are sometimes defined as a ratio: the number of 'interesting' or 'relevant' cases divided by the 'total' number of cases.

In the other answer I computed the first of these numbers (which is also what you are asking here in the body of the question - probabilities show up only in the title) but if you want to turn the answer into a probability, you also need the second number, i.e. the total number of things that COULD have happened (with equal probability) under a simpler model of the underlying biology. The question is: what is the simpler model? If you consider 'all cases' to be all ways of placing a, c, t, g into the 48 slots then there are $4^{48}$ possibilities, but from the wording of the question I get the impression that you have a more subtle idea about what is going on here: the 'total' number of cases is the number of placements of a, c, g, t that obey some but not all of the conditions from the question, and within that you consider the interesting cases the ones that satisfy all.

I computed the number of interesting cases over at MSE, but if you want a probability you need to be more specific about what subset of conditions define the 'total' number of cases.

Not the answer you're looking for? Browse other questions tagged probability conditional-probability probability-inequalities or ask your own question.