I have read through the R documentation of lvplots, but it didn't provide enough material on how I would interpret these plots. I want to just have an intuitive idea on interpreting these plots. I know for k=2 , the IQR and median are represented.

Below is a particular example for k=3. 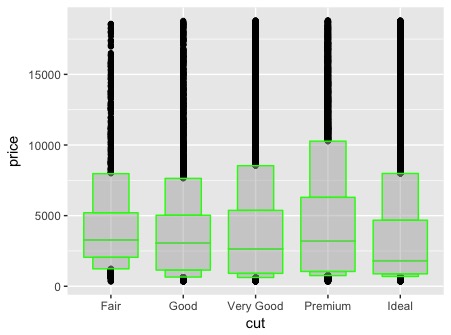 Earlier versions of this paper can easily be found on-line.

As I understand it the width of each box just indicates how a box is defined. The fattest box is between letter values that are (approximate) quartiles, the next fattest boxes stretch between (approximate) quartiles and the (approximate) octiles beyond in either tail, and so on. Positively, this is just an extension of the common box plot convention that each box indicates that it is the interval between quartiles and the width is otherwise just a conventional choice. (Only occasionally are boxes shown that indicate the number of values in each.)

A little more negatively, people have to learn that the width of the box is otherwise arbitrary. It's not, for example, a boxy version of a density plot.

For a survey of letter values with different emphasis, see

I have to worry, on behalf of those who advocate this plot, that naive users are all too likely to interpret it as a blocky version of a violin plot, just as histograms are discretised density plots. The ideal of showing more detail than a box plot is admirable, and the practice usually helps, but there are many other ways to do that. Naturally, advice to read how it is defined and constructed should always be followed.

Not the answer you're looking for? Browse other questions tagged r data-visualization boxplot or ask your own question.

12
Confused by location of fences in box-whisker plots
15
How to interpret notched box plots
4
Qualitative difference between boxplots and error bars (descriptive vs inferrential statistics?)
1
Interpreting percentage of an outlier in a box plot
7
Missing quartile in boxplot