Is it possible to have a pair of Gaussian random variables for which the joint distribution is not Gaussian?

Somebody asked me this question in a job interview and I replied that their joint distribution is always Gaussian. I thought that I can always write a bivariate Gaussian with their means and variance and covariances. I am wondering if there can be a case for which the joint probability of two Gaussians is not Gaussian?

The bivariate normal distribution is the exception, not the rule!

Certainly, the multivariate normal is extremely important due to its stability under linear transformations, and so receives the bulk of attention in applications.

It is useful to start with some examples. The figure below contains heatmaps of six bivariate distributions, all of which have standard normal marginals. The left and middle ones in the top row are bivariate normals, the remaining ones are not (as should be apparent). They're described further below. 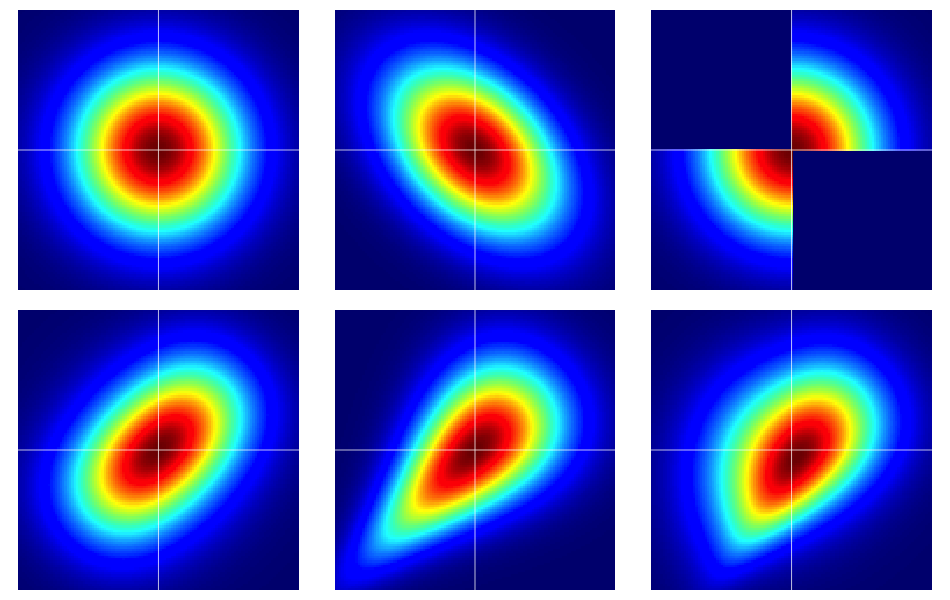 The bare bones of copulas

Properties of dependence are often efficiently analyzed using copulas. A bivariate copula is just a fancy name for a probability distribution on the unit square $[0,1]^2$ with uniform marginals.

For continuous $F_1$ and $F_2$, Sklar's theorem asserts a converse implying uniqueness. That is, given a bivariate distribution $F(x,y)$ with continuous marginals $F_1$, $F_2$, the corresponding copula is unique (on the appropriate range space).

The bivariate normal is exceptional

But, there are lots of other copulas and all of them will give a bivariate distribution with normal marginals which is not the bivariate normal by using the transformation described in the previous section.

Some details on the examples

Note that by applying the Gaussian copula in the above equation, we recover the bivariate normal density. But, for any other choice of $c(u,v)$, we will not.

The examples in the figure were constructed as follows (going across each row, one column at a time):

Edit: In response to the consensus that a random variable that is a point mass can be thought of as a normally distributed variable with $\sigma^2=0$, I'm changing my example.

We first show that $Y$ has a standard normal distribution. By the law of total probability,

where $\Phi$ is the standard normal CDF. Similarly,

The following post contains an outline of a proof, just to give the main ideas and get you started.

Each $X_i \sim N(\mu_i, \sigma_i^2)$, but as they are both linear combinations of the same independent r.vs, they are jointly dependent.

Lemma If $ x = (X_1, X_2)$ is a bivariate Gaussian, then any other linear combination of them is again a normal random variable.

Proof. Trivial, skipped to not offend anyone.

Property If $X_1, X_2$ are uncorrelated, then they are independent and vice-versa.

Assume $X_1, X_2$ are the same Gaussian r.vs as before but let's suppose they have positive variance and zero mean for simplicity.

Two univariate Gaussian random variables $X, Y$ are jointly Gaussian if the conditionals $X | Y$ and $Y|X$ are Gaussian too.

I thought it might be worth pointing out a couple of nice examples; one I've mentioned in a couple of older answers here on Cross Validated (e.g. this one) and one rather pretty one which occurred to me the other day.