Bias from a simulation

My aim is given the data, find an estimation for the signal $s_1$ by finding a posterior distribution for it.

So, I used bayes theorem (G is a gaussian with zero mean, C covariance matrix for the components and N for the noise)

This $\hat{s}_1$ depends on the vector d and on the covariances.

Now I want to test it:

Then I use my estimator to see if this is equal to the true value.

In this plot the x axis is the 'measurement' number i On the y axis there are the estimations $\hat{s}_1$ in red dot and the black line is the true signal $s_1$.

I thought that an estimator should reproduce the true value. The problem is that all the dots are 'far' for the true signal. Also their mean is far. What am I doing wrong?

Have I some conceptual misunderstanding or the issue is another one?

But how can I find the expectation value of the estimation? Should I take a lot of data, make a lot of estimations and take the mean?

This is a typical graph 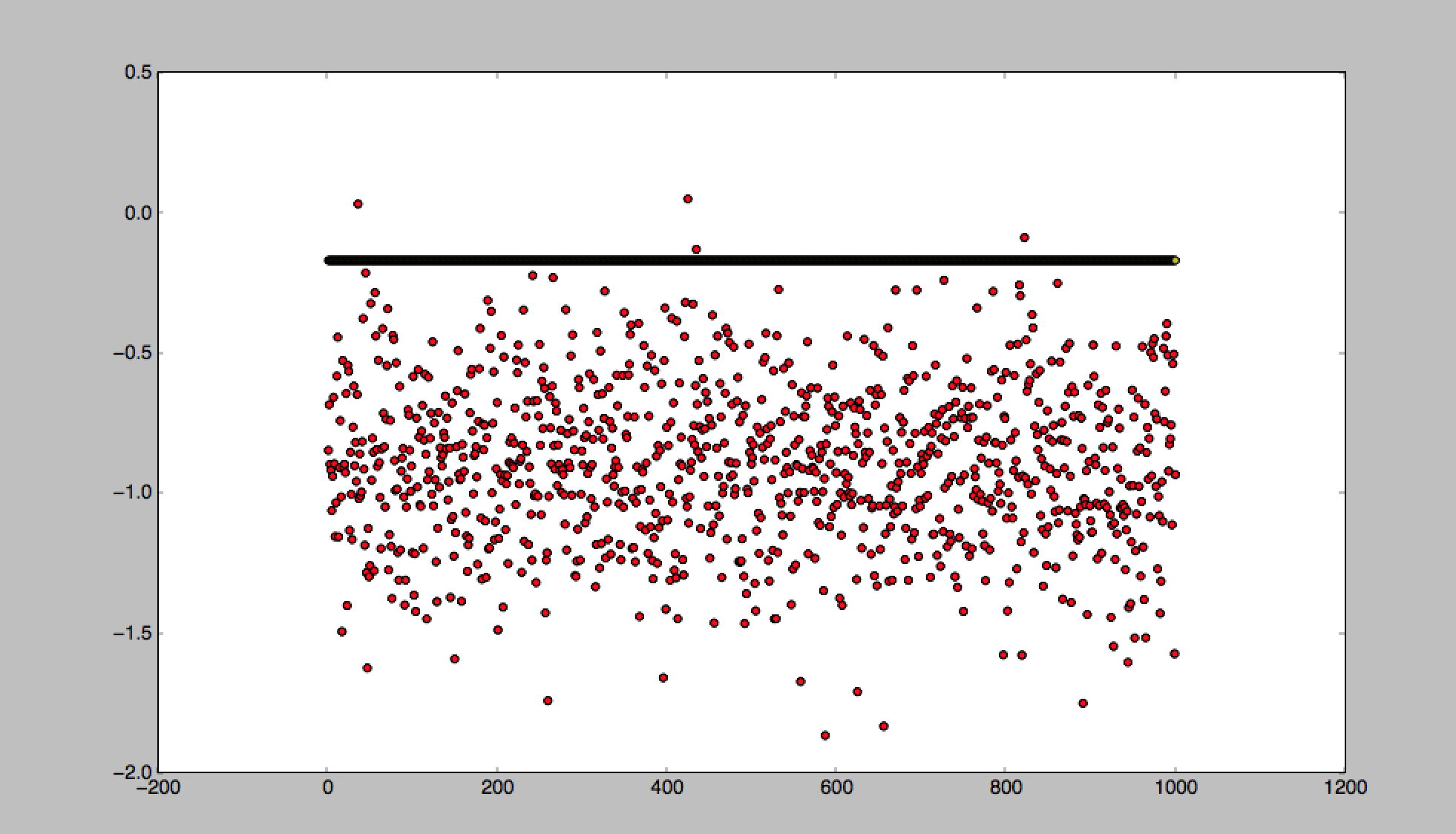 Your notation is confusing for me, so allow me to change it slightly in my answer. If your model is (for simplicity let's forget about $A$)

Your general mistake is that you are not using Bayes theorem at all in your equations. What you write is

The proper use of Bayes theorem would be something like below. First, we would define the likelihood function, i.e. the function of your data conditional on parameters,

In your case the parameters are $\mu_d = \mu_s + \mu_n$ and $\Sigma_d = \Sigma_s + \Sigma_n$. Since you want to conduct a simulation to assess your estimator, you would assume that you don't know $\mu_s,\mu_n,\Sigma_s,\Sigma_n$ (otherwise there is nothing to estimate, as already described). The problem in here is that you cannot separate $S$ and $N$ knowing only their sum. Fortunately, if you know that $\mu_n = \boldsymbol{0}$ and $\Sigma_n = \boldsymbol{I}$, then you also know that $\mu_d = \mu_s + \boldsymbol{0} = \mu_s$, what simplifies your problem to estimating $\mu_d$. To estimate $\mu_d,\Sigma_d$ you would need to assume some kind of priors for them and use Bayes theorem

where $p(\mu_d), p(\Sigma_d)$ are priors for your parameters. To estimate it, you could use optimization (if you need only the MAP estimate), conjugate priors, or MCMC.

Finally, bias of the estimator would be

Not the answer you're looking for? Browse other questions tagged bayesian estimation bias or ask your own question.

3
Estimating values of a sequence from observed differences
1
Maximum Likelihood solution of a zero-covariance process
3
Getting the posterior for Bayesian linear regression with a flat prior
0
Bayesian updating with normal but incomplete signals
0
why $y$ appears in the log-likelihood of logistic regression?