Batch normalisation at the end of each layer and not the input?

I am currently studying the paper of network implementation RCNN.

The core module inside RCNN is the Recurrent Convolutional Layer (RCL), whose state evolves over discrete time steps.

The network is similar to ResNet.

Each RCL block is defined as such...

What I guess confuses me, is it's usually used at the beginning, so doing it at the end seems a bit... unusual? - as described here and here and also here.

$σ(x) = f_n(g(x))$ is a composition of two nonlinear functions. The inner one $g(x)$ can be either a conventional sigmoid function $g(x) = > 1/(1 + e−x)$ or a rectified linear unit (ReLU) [21] $g(x) = max{x, > 0}$. A model with ReLU usually converges faster and tends to achieve better performance compared to using the sig- moid function. However, the faster convergence brings the problem of “exploding gradient”, which calls for smaller learning rate and necessary normalization. The outer function $f_n(·)$ denotes an appropriate normalization function. The batch-normalization method [14] is adopted here

According to Ioffe and Szegedy (2015), batch normalization is employed to stabilize the inputs to nonlinear activation functions.

"Batch Normalization seeks a stable distribution of activation values throughout training, and normalizes the inputs of a nonlinearity since that is where matching the moments is more likely to stabilize the distribution"

So normally, it is inserted after dense layers and before the nonlinearity. Below is a part of lecture notes for CS231n. 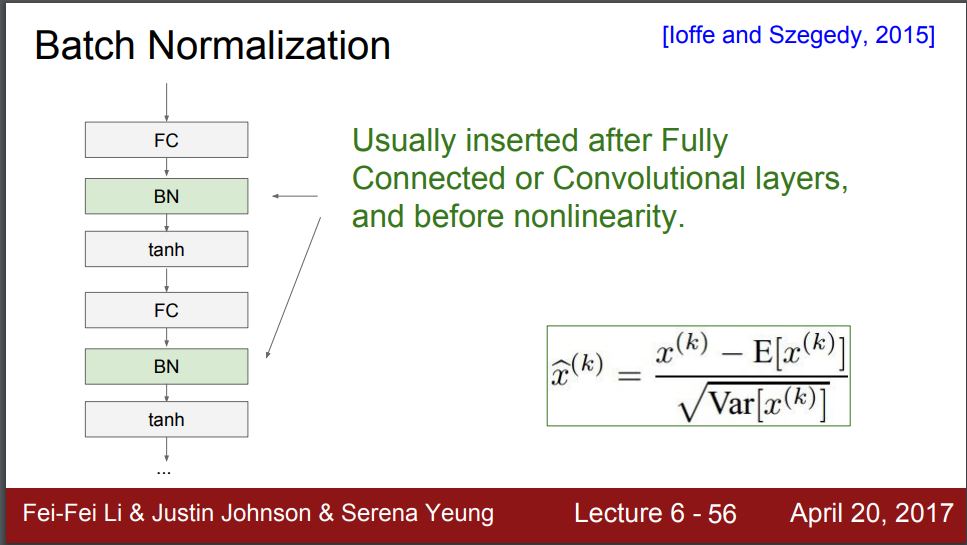 Not the answer you're looking for? Browse other questions tagged python rnn convolution keras batch-normalization or ask your own question.