Does there exist someone faster than Usain Bolt today?

EDIT: I am more interested in the technical issues and methodology of determining the likelihood of a "true" maximum in a given population given a sample statistic. There are problems with estimating the likelihood of faster runners than Mr. Bolt from record-setting dash times that are both obvious and subtle. Humor me by imagining this not to be the case.

Usain Bolt is the fastest human measured for the 100m dash. However, given the small number of athletes, it seems likely that the "true" fastest human alive is sitting on a couch somewhere and has never attempted a competitive running career.

I am trying to use the fact that the difference between samples at the tails of the normal distribution become smaller and smaller. I'm using this to compute the likelihood there exists someone faster than Usain Bolt by comparing Usain to the 2nd fastest, 3rd fastest and so on.

To do this, I'm trying to compute the largest value that exists beyond "Usain Bolt" by taking the derivative of the normal distribution's CDF with respect to $y$, raising that to the $n$th (where $n$ is about 7,000,000,000 or the number of samples less than the "maximum" - the logic behind this is described in the German Tank Problem Wikipedia page which generalizes among different distributions), e.g:

Thank you for your patience in dealing with a programmer without a background in the topic.

Contrary to other answers, I'd argue that you can say something about Bolts abilities given the available data. First of all, let's narrow your question. You are asking about fastest human, but since there is a difference in the distributions of running speeds for men and woman, where the best woman runners woman seem to be slightly slower then the best man runners, we should focus on men runners. To get some data, we can look at the best year performances on 100 run from the last 45 years. There are several things to notice about this data:

First, let's discuss how not to analyze this data. You could notice that if we plot the running times against time, we would observe a strong linear relationship. 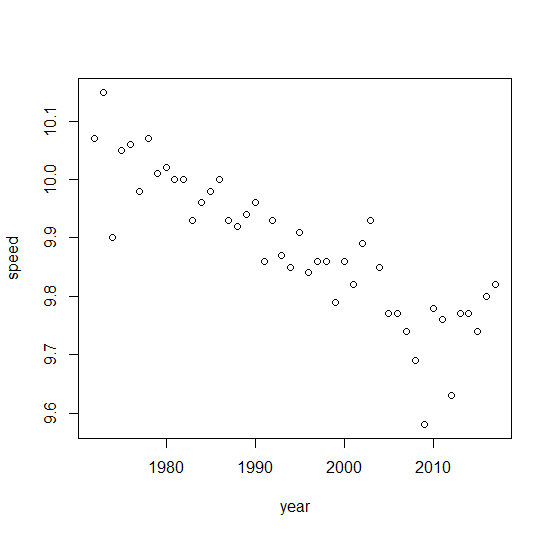 This could lead you to using linear regression to forecast how much better runners we could observe in the next years. This however would be a very bad idea, that would inevitable lead you to conclusion that in approximately two thousand years humans would be able to run 100 meters in zero seconds, and after that they would start achieving the negative running times! This is obviously absurd, as we can imagine that there is some kind of biological and physical limit of our capacities, that is unknown to us.

How could you analyze this data? First, notice that we are dealing with data about minimal values, so we should use appropriate model for such data. This leads us to considering extreme value theory models (see e.g. An Introduction to Statistical Modeling of Extreme Values book by Stuart Coles). You can assume for this data generalized extreme value distribution (GEV). If $Y = \max(X_1,X_2,\dots,X_n)$ where $X_1,X_2,\dots,X_n$ are independent and identically distributed random variables, then $Y_i$'s follow a GEV distribution. If you are interested in modeling minimas, then if $Z_1,Z_2,\dots,Z_k$ are samples of minimas, then $-Z_i$'s follow a GEV distribution for minimas. So we can fit GEV distribution to the running speeds data, what leads to pretty nice fit (see below). 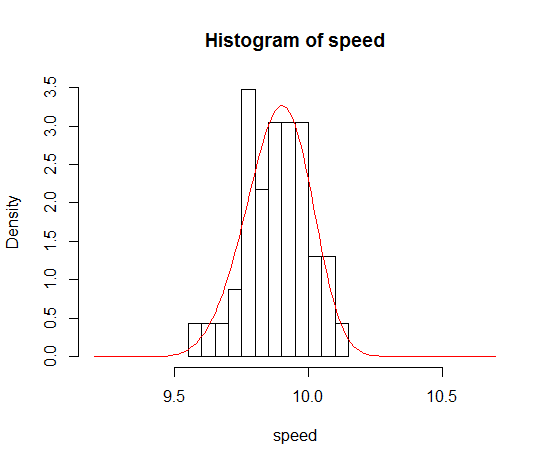 If you look at at the cumulative distribution suggested by the model, you'll notice that the best running time by Usain Bolt is in the lowest $1\%$ tail of the distribution. So if we stick to this data, and this toy-example analysis, we would conclude that the much smaller running times are unlikely (but obviously, possible). The obvious problem with this analysis is that ignores the fact that we saw year-to-year improvements of the best running times. This gets us back to the problem described in the first part of the answer, i.e. that assuming a regression model in here is risky. Another thing that could be improved is that we could use Bayesian approach and assume informative prior that would account for some out-of-data knowledge about the physiologically possible running times, that might not yet been observed (but, as far as I know, this is unknown at present moment). Finally, similar extreme value theory was already used in sports research, e.g. by Einmahl and Magnus (2008) in the Records in Athletics Through Extreme-Value Theory paper.

You could protest that you didn't ask about probability of the faster running time, but about probability of observing faster runner. Unfortunately, here we can't do much since we don't know what is the probability that a runner will become a professional athlete and the recorded running times will be available for him. This doesn't happen at random and there is lots of factors contributing to the fact that some runners become professional athletes and some don't (or even that someone likes running and runs at all). For this, we would have to have a detailed population-wide data on runners, moreover since you are asking about the extremes of the distribution, the data would have to be very large. So on this, I agree with the other answers.

My first instinct is this is a bad idea, but let me break down a bit why.

1) You want to measure an unobservable variable, latent running skill, with an observable one, recorded running times. That's ok, but: In the German tank problem, the serial numbers are all generated from the same uniform distribution. In your problem, you have to infer the latent variable skill (of 7 billion people) from the observable variable running times. In the GTP, multiple serial numbers are known. In your problem, you have collected no data at all and are just going on the max (Bolt). Moreover, you seem to assume that this unobservable latent skill is uncorrelated with actual running times to the point where it's possible that someone who has never run at all is better than Bolt. It just seems absurd!

2) Athletes are not random samples of the population. They are selected carefully by multiple trials. If we assume that everyone capable of running at all has probably raced someone at least once in their life and that each person has made a decision on whether they should continue to a higher level of competition based on how often or by how much they win these races---then it doesn't seem that implausible that Bolt really is the fastest human being there is.

These are just the first reasons that come to mind. Honestly, you're on a bit of a fool's errand with this. There is no way to measure the "probability" of the kind of thing you're talking about.

The answer is NO.

You're assuming that there is a sample from the population (athletes), and Bolt is the max on this sample. So, you're looking for the probability that the max of population is greater than the max of sample. That's your hypothesis.

What if your assumption is wrong, and that the sample was indeed the population?

I can make a reasonable argument that every person that can run had a chance to beat him. Nobody did, so he's the true max of the population of Earth.

It is clear that the athletes are not a random sample. I hope there is no question about this. There is a degree of randomness in how one becomes an athlete, of course. On the other hand, if one's not an athlete then his athletic skills and accomplishments are not going to compare to the athlete. I can take it that someone COULD POTENTIALLY run faster than Bolt given all the conditions for training AND HAVING trained as hard as Bolt. However, it is zero probability that you pull a non athlete and he beats Bolt in 100m dash under track and field conditions.

Not the answer you're looking for? Browse other questions tagged normal-distribution extreme-value or ask your own question.

20
Why use extreme value theory?

1
How to measure which program is faster than another in a statistically meaningful way?
6
Fitting a Gaussian to a histogram when the bin size is significant
2
Why does Naive Bayes use gaussian pf rather than Student's t?
3
Gradient ascent to maximise log likelihood