Can this be answered without referring to characteristic functions?

Now can I conclude from here that $P_{X_2}(t)=P_{X_3}(t)$? Moreover, I am restricting the random variables to be non-negative integer valued if I proceed like this.

OK, for this answer I will assume the independent random variables have moment generating functions (mgf) existing in some open interval containing zero. To dispel one possible doubt, mgf's can never be zero, since they are given by expectation of an exponential function $\DeclareMathOperator{\E}{\mathbb{E}} M_X(t) = \E e^{t X}$. Exponential functions are everywhere positive so that expectation can never be zero (or negative).

Now, what to do if mgf's do not exist? Replace the mgf's in the proof with characteristic functions. That becomes somewhat more involved, since that involves complex numbers, and my proof above that mgf's can never take the value zero do not work in that case. But we can save the argument in that case in the following way: a characteristic function is always (uniformly) continuous, on the entire space, see https://en.wikipedia.org/wiki/Characteristic_function_(probability_theory) . Since it always take the value 1 at the argument zero, we can find an open interval containing zero where none of the three characteristic functions have zeros, so the cancellation works as above (this argument also works for moment generating functions).

The proof given by @kjetil b halvorsen is fine, as long as the moment generating function exists.

However, there are counter examples when it does not. First, we need to recall a theorem by Polya. (More details can be found in the article Remarks on characterisic functions by G. Polya)

If φ is a real-valued, even, continuous function which satisfies the conditions

then φ(t) is the characteristic function of an absolutely continuous symmetric distribution.

Now from this theorem, the two functions below are characteristic functions of some random variables, call them $X_1$ and $X_2$. 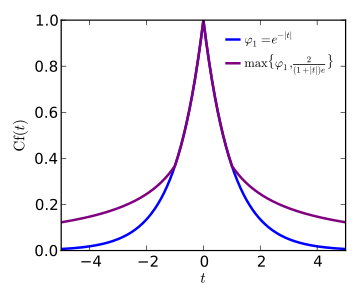 Not the answer you're looking for? Browse other questions tagged probability distributions random-variable mgf probability-generating-fn or ask your own question.

13
For which distributions does uncorrelatedness imply independence?
10
Get joint distribution from pairwise marginal distribution
7
Probability of k zeros give the sum of n Poisson random variables is t?
1
When $(X_1-X_0, X_1-X_2)\sim (X_2-X_0, X_2-X_1)\sim(X_0-X_1, X_0-X_2)$?
5
Independence of ratios of independent variates