How to test hypothesis of no group differences?

Imagine you have a study with two groups (e.g., males and females) looking at a numeric dependent variable (e.g., intelligence test scores) and you have the hypothesis that there are no group differences.

I think you are asking about testing for equivalence. Essentially you need to decide how large a difference is acceptable for you to still conclude that the two groups are effectively equivalent. That decision defines the 95% (or other) confidence interval limits, and sample size calculations are made on this basis.

There is a whole book on the topic.

A very common clinical "equivalent" of equivalence tests is a non-inferiority test/ trial. In this case you "prefer" one group over the other (an established treatment) and design your test to show that the new treatment is not inferior to the established treatment at some level of statistical evidence.

I think I need to credit Harvey Motulsky for the GraphPad.com site (under "Library").

Besides the already mentioned possibility of some kind of equivalence test, of which most of them, to the best of my knowledge, are mostly routed in the good old frequentist tradition, there is the possibility of conducting tests which really provide a quantification of evidence in favor of a null-hyptheses, namely bayesian tests.

There is also a tutorial on how to do all this in R:

An alternative (perhaps more modern approach) of a Bayesian t-test is provided (with code) in this paper by Kruschke:

All props for this answer (before the addition of Kruschke) should go to my colleague David Kellen. I stole his answer from this question.

Following Thylacoleo's answer, I did a little research.

The equivalence package in R has the tost() function.

There are a few papers I know of that could be helpful to you:

I have recently thought about an alternative way of "equivalence testing" based on a distance between the two distributions rather than between their means.

There are some methods providing confidence intervals for the overlap of two Gaussian distributions: 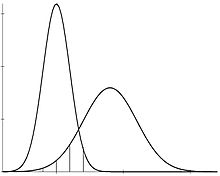 I think there's an advantage in terms of "objectiveness" of the criterion. The critical value of $|\mu_1 - \mu_2|$ should be given by an expert of the real problem: this should be a value beyond which the difference has a practical importance. But sometimes nobody has a solid knowledge about the real problem and there's no expert able to provide a critical value. Adopting a conventional critical value about $TV(P_1,P_2)$ could be a way to a criterion not depending on the physical problem under consideration.

In the Gaussian case with same variances, the overlap is one-to-one related to the standardized mean difference $\frac{|\mu_1-\mu_2|}{\sigma}$.

In the medical sciences, it is preferable to use a confidence interval approach as opposed to two one-sided tests (tost). I also recommend graphing the point estimates, CIs, and a priori-determined equivalence margins to make things very clear.

Your question would likely be addressed by such an approach.

The CONSORT guidelines for non-inferiority/equivalence studies are quite useful in this regard.

Yes. This is equivalence testing. Basically you reverse the null and alternative hypothesis and base the sample size on the power to show that the difference of the means is within the window of equivalence. Blackwelder called it "Proving the null hypothesis." This is commonly done in pharmaceutical clinical trials where equivalence of a generic drug to the marketed drug is tested or an approved drug is compared to a new formulation (often called bioequivalence). The one sided version is called non-inferiority. Some times a drug can be approved by just showing that the new drug is not inferior to the marketed competitor. Shao and Pigeot have developed a consistent bootstrap approach to bioequivalence using crossover designs.

Bootstrap differences (e.g. the difference between the means) between the 2 sample groups and check for statistical significance. A more detailed description of this approach, albeit in a different context, can be found here http://www.automated-trading-system.com/a-different-application-of-the-bootstrap/

Not the answer you're looking for? Browse other questions tagged hypothesis-testing t-test equivalence tost or ask your own question.

4
How do you show that two populations are statistically similar?
2
Method for proving no difference in a set of paired samples
0
Regarding T-Test for point hypotheses
277
Famous statistical quotations
53
When conducting a t-test why would one prefer to assume (or test for) equal variances rather than always use a Welch approximation of the df?
50
Percentage of overlapping regions of two normal distributions
38
Is it possible to prove a null hypothesis?
9
Equivalence tests for non-normal data?
9
Can a narrow confidence interval around a non-significant effect provide evidence for the null?
4
How to test if two means are significantly similar?
See more linked questions

23
Group differences on a five point Likert item
3
Is there a way to test a probabilistic prediction for an uncontrollable experiment?
1
Hypothesis testing using different methods
2
What is the distinction between "relationships" and "differences" (particularly in the context of group differences on a numeric attribute)?
29
Kolmogorov–Smirnov test vs. t-test
2
Basic question on difference between two means