Quantile regression (QR) is sometimes said to reveal different relationships between variables at different quantiles of the distribution. E.g. Le Cook et al. "Thinking beyond the mean: a practical guide for using quantile regression methods for health services research" imply that QR allows for relationships between the outcomes of interest and the explanatory variables to be nonconstant across different values of the variables.

However, as far as I know, in a standard linear regression model $$ y = \beta_0 + \beta X + \varepsilon $$ with $\varepsilon$ being i.i.d. and independent of $X$, the QR estimator for the slope $\beta$ is consistent for the population slope (which is unique and does not anyhow vary across quantiles). That is, the object being estimated is always the same, regardless of the quantile. Admittedly, this is not the case for the intercept, since the QR intercept estimator aims at estimating a particular quantile of the error distribution. Taken together, I do not see how the different relationships between variables are supposed to be revealed at different quantiles via the QR. I guess this is a property of the standard linear regression model rather than a mistake in my understanding, but I am not sure.

I suppose the situation is different when some of the assumptions of the standard linear model are violated, e.g. under certain forms of conditional heteroskedasticity. Then perhaps the QR slope estimators converge to something else than the true slope of the linear model and somehow reveal different relationships at different quantiles.

What am I getting wrong? How should I properly understand/interpret the claim that quantile regression reveals different relationships between variables at different quantiles?

If you are willing to make that strong assumtions, there is not much point in running QR as you can always calculate conditional quantiles via conditional mean and fixed variance. The "true" slopes of all quantiles will be equal to the true slope of the mean. In a specific sample, of course there will be some random variation. Or you might even detect that your strict assumptions were wrong...

Let me illustrate by an example in R. It shows the least squares line (black) and then in red the modelled 20%, 50%, and 80% quantiles of data simulated according to the following linear relationship $$ y = x + x \varepsilon, \quad \varepsilon \sim N(0, 1) \ \text{iid}, $$ so that not only the conditional mean of $y$ depends on $x$ but also the variance. 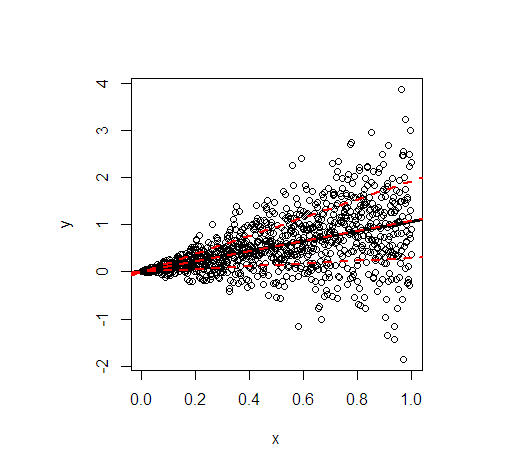 The code to generate the picture:

Not the answer you're looking for? Browse other questions tagged interpretation quantile-regression or ask your own question.