Why LKJcorr is a good prior for correlation matrix?

I´m reading the chapter 13 "Adventures in Covariance" in the (superb) book Statistical Rethinking by Richard McElreath where he presents the following hierarchical model: 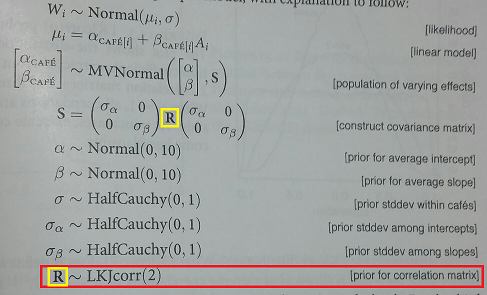 (R is a correlation matrix)

The LKJ distribution is an extension of the work of H. Joe (1). Joe proposed a procedure to generate correlation matrices uniformly over the space of all positive definite correlation matrices. The contribution of (2) is that it extends Joe's work to show that there is a more efficient manner of generating such samples.

The parameterization commonly used in software such as Stan allows you to control how closely the sampled matrices resemble the identity matrices. This means you can move smoothly from sampling matrices that are all very nearly $I$ to matrices which are more-or-less uniform over PD matrices.

An alternative manner of sampling from correlation matrices, called the "onion" method, is found in (3). (No relation to the satirical news magazine -- probably.)

Another alternative is to sample from Wishart distributions, which are positive semi-definite, and then divide out the variances to leave a correlation matrix. Some downsides to the Wishart/Inverse Wishart procedure are discussed in Downsides of inverse Wishart prior in hierarchical models

Not the answer you're looking for? Browse other questions tagged regression self-study correlation prior hierarchical-bayesian or ask your own question.

6
Downsides of inverse Wishart prior in hierarchical models
1
What priors are typically used for the correlation parameter in a bivariate normal?

6
Downsides of inverse Wishart prior in hierarchical models
7
Plotting Correlation Matrix over time
1
What is the correct form of Metropolis Hasting step in scaled Inverse Wishart prior for covariance matrix?
8
Choosing prior for $\sigma^2$ in the normal (polynomial) regression model $Y_i | \mu, \sigma^2 \sim \mathcal{N}(\mu_i, \sigma^2)$
1
Proposal for correlation matrix with LKJ prior
2
How to impose restrictions on a random matrix via its prior distribution?