Now, when I look at my d-prime scores, they seem to be normally distributed around zero: 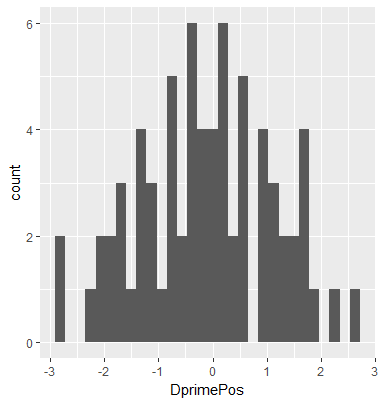 or in this interpretation: http://www.csic.cornell.edu/201/signal_detection/#negative_d_prime.

Now, I'm wondering if I can assume that in some cases my subjects were just confused about which button represented which response? For example, those samples around -3 really seem to indicate a large sensitivity to the signal, however in complete reverse. Could I use absolute values of these extreme negative d-prime samples to still include them in my sample and further interpretation?

EDIT: I had another look at the data, it seems like this effect does not stem from the errors subjects have made. The max error percentage was 60%, with an average of 42%. Perhaps it's the way I calculated the z-scores? I used the scale function in R, but I don't see why that would be a problem?

r signal-detection d-prime
Share
Improve this question
edited May 15 '18 at 0:47

Browse other questions tagged r signal-detection d-prime or ask your own question.

5
Why use d-prime instead of percent correct?
13
Connections between $d^\prime$ (d-prime) and AUC (Area Under the ROC Curve); underlying assumptions
11
d prime with 100% hit rate probability and 0% false alarm probability
9
Fitting exponential decay with negative y values
0
Is there an accepted way to interpret d' (d-prime) for evidence of detection
0
Calculating d prime in SPSS - Signal Detection
1
Negative correlation between d' and hit rates?