Stepwise quantile regression: What's the reason behind these strange results?

So I am attempting to build a model using quantile regression & am using stepwise regression for initial data exploration. I'm well aware that stepwise methods are widely frowned upon & am using this approach purely for exploratory purposes, as I have a very large amount of variables, most of which could theoretically be relevant to our phenomenon.

I am seeing some strange behavior that makes me wonder if something in my data is inappropriate for this type of analysis & possibly points to gaps in my conceptual understanding of quantile regression and/or stepwise selection. I'm working in R, though I suspect it's a conceptual issue & not a problem with R.

The code is essentially just:

Here are the main red flags I'm seeing (though they raise somewhat separate questions, I'm presenting them all, since I wonder if the issues are in fact related):

Some features of our data that I suspect are causing these (& possibly other less visible?) issues:

I suspect one or several of the characteristics of our data is leading to the strange outputs (radically different at tau = 0.9 vs. 0.99). Is there a conceptual reason for this & how might we be able to address it?? Do any of the data characteristics described clearly invalidate the approach here?

By setting $\tau=0.99$ you are essentially fitting to the noise at the extreme high-end of your sampling distribution. If you imagine the only-slightly-more-extreme case with $\tau=1.0$, you would be fitting exclusively to the points comprising the upper-envelope of your data, in other words sparsely-distributed points which are almost guaranteed to be unrepresentative outliers. See the plot below for reference. 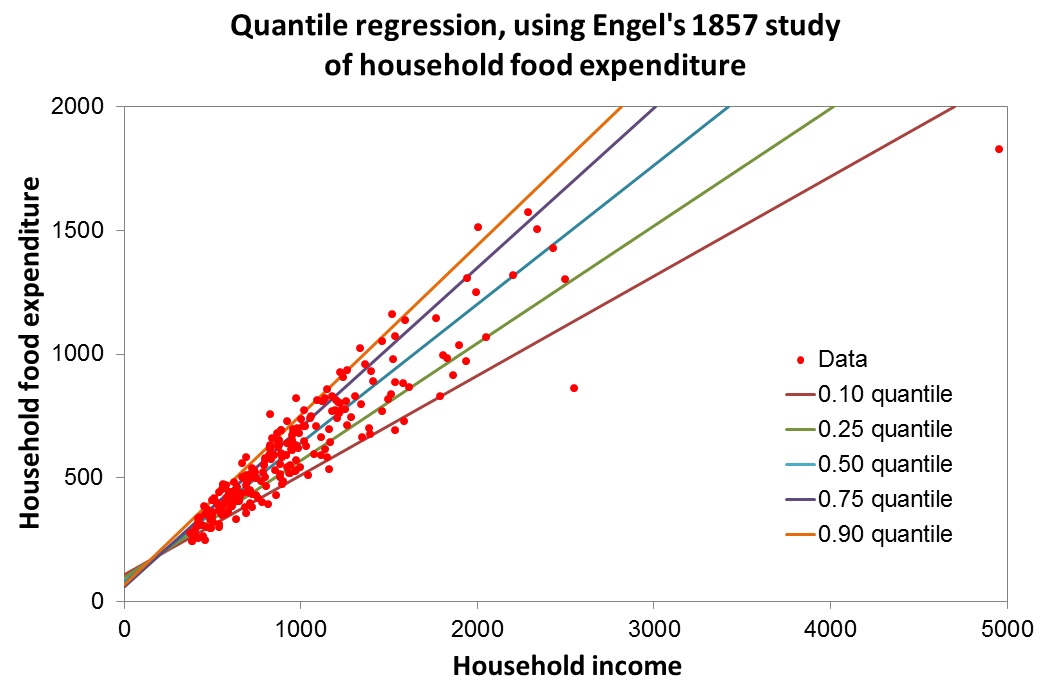 What is it about your specific use-case that makes you want to perform your fit at such a high percentile?

Not the answer you're looking for? Browse other questions tagged r regression stepwise-regression quantile-regression singular or ask your own question.

5
Can you use heteroskedastic time series variables within a regression model?
7
About interpretation of the results of quantile regression
3
Using quantile regression to predict probability of surpassing threshold
13
What exactly is "stepwise model selection"?
0
Simple linear regression vs. partial least squares (PLS)