However, I'm not sure how to formally show that $Y_1, Y_2$ are independent. This post indicates that identical distribution does not imply independence. I also don't think the joint PDF is calculable given only the marginals without assuming independence?

Any advice on what approach to use to show independence that uses the fact that $X_1, X_2$ are independent?

This is a collection of $d$ identical statements, one for each coordinate, so it suffices to examine the case $d=1$. 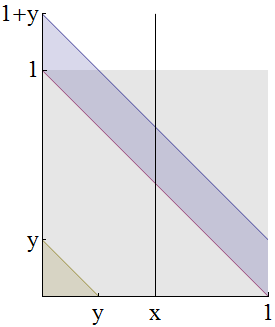 Writing $[z] = z-\lfloor z\rfloor$ for the fractional part of any number $z$,

We have seen how, throughout the support of $(Y_1,Y_2)$, its distribution function factors into the product of the marginal distributions. Consequently $(Y_1,Y_2)$ is independent.

Not the answer you're looking for? Browse other questions tagged random-variable pdf independence uniform joint-distribution or ask your own question.

5
If random variables are drawn from an identical distribution, why doesn't this guarantee they are independent?

5
Joint distribution of two sums of correlated variables
2
How to justify the statistical independence among two sets of continuous multivariate observations
3
Convergence of $X_{{\lfloor n/3 \rfloor}}^ \space\small{(n)}$ if $X_1, \dotsc , X_n \sim U(0,1)$
1
Notation and explanation for certain conditional random variables
0
The joint p.d.f of $Y_1$ and $Y_2$ if given p.d.f of $X_1$ and $X_2$
0
(Solution-verification) Transformation of Joint Probability 3 independent variables case
1
Convolution of a less typical distribution