How do we incorporate new information into a Dirichlet prior distribution?

My problem is this: I have an ensemble of predictors that each produces a distribution over a set of classes.

What I would like to do is to first have a non-informative prior about how this label distribution looks like, and then update that prior with the prediction of each member of the ensemble.

So I thought of using a non-informative Dirichlet prior, which I then update with each sample distribution that comes in as a prediction.

My question is: Is this approach valid, and if yes how would I update my prior so that, it becomes more defined as more samples accumulate?

If we draw this as a neural network model, it looks like: 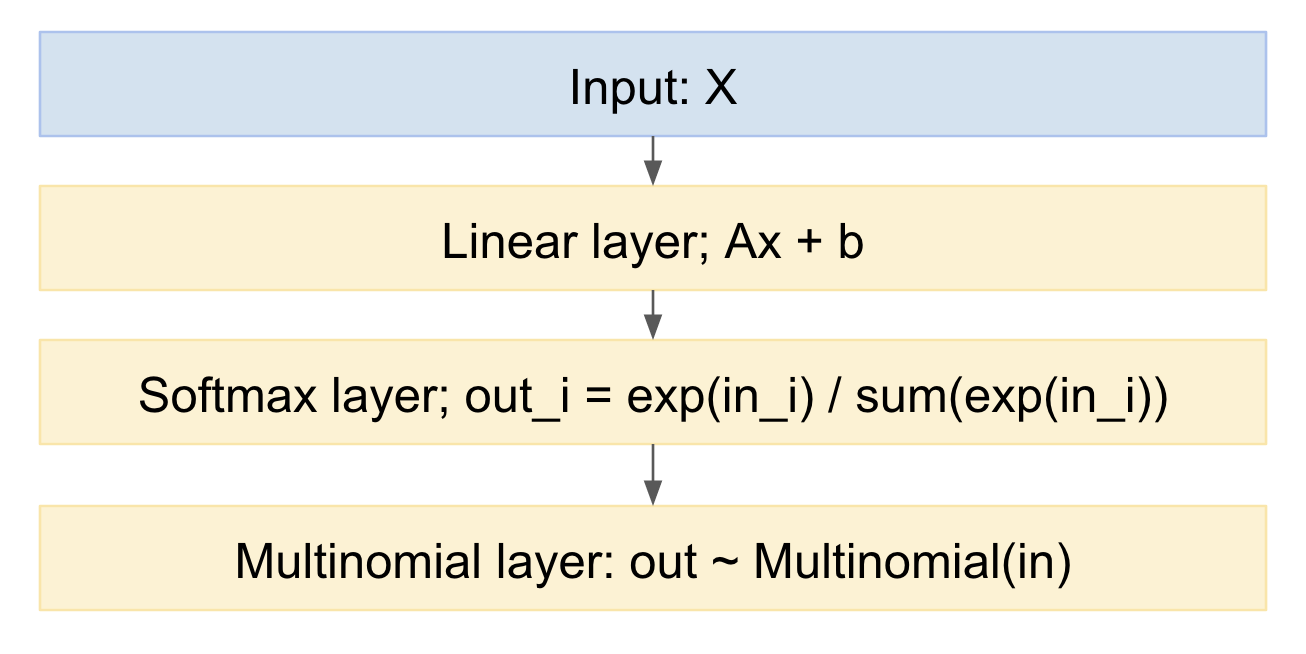 We can easily sample from this, in the forwards direction. How to handle backwards direction? We can use the reparameterization trick, from Kingma's 'Auto-encoding variational Bayes' paper, https://arxiv.org/abs/1312.6114 , in other words, we model the multinomial draw as a deterministic mapping, given the input probability distribution, and a draw from a standard Gaussian random variable:

So, our network becomes:

So, we can forward propagate mini-batches of data examples, draws from the standard normal distribution, and back-propagate through the network. This is fairly standard and widely used, eg the Kingma VAE paper above.

A slight nuance is, we are drawing discrete values from a multinomial distribution, but the VAE paper only handles the case of continuous real outputs. However, there is a recent paper, the Gumbel trick, https://casmls.github.io/general/2017/02/01/GumbelSoftmax.html , ie https://arxiv.org/pdf/1611.01144v1.pdf ,and https://arxiv.org/abs/1611.00712 , which allows draws from discrete multinomial papers.

The $\alpha_k$ here are prior probabilities for the various categories, which you can tweak, to push your initial distribution towards how you think the distribution could be distributed initially.

Thus we have a model that:

So, the question asks:

"is it possible to apply this kind of technique when we have multiple predictions (and each prediction can be a softmax, like above) for a single sample (from an ensemble of learners)." (see comments below)

The 'head' comprises an extract layer, which handles 'mixing' between the nets. Note that you'll need a non-linearity between your 'learners' and the 'mixing' layer, eg ReLU or tanh.

You hint at giving each 'learn' its own multinomial draw, or at least, softmax. On the whole, I think it will be more standard to have the mixing layer first, followed by a single softmax and multinomial draw. This will give the least variance, since fewer draws. (for example, you can look at 'variational dropout' paper, https://arxiv.org/abs/1506.02557 , which explicitly merges multiple random draws, to reduce variance, a technique they call 'local reparameterization') 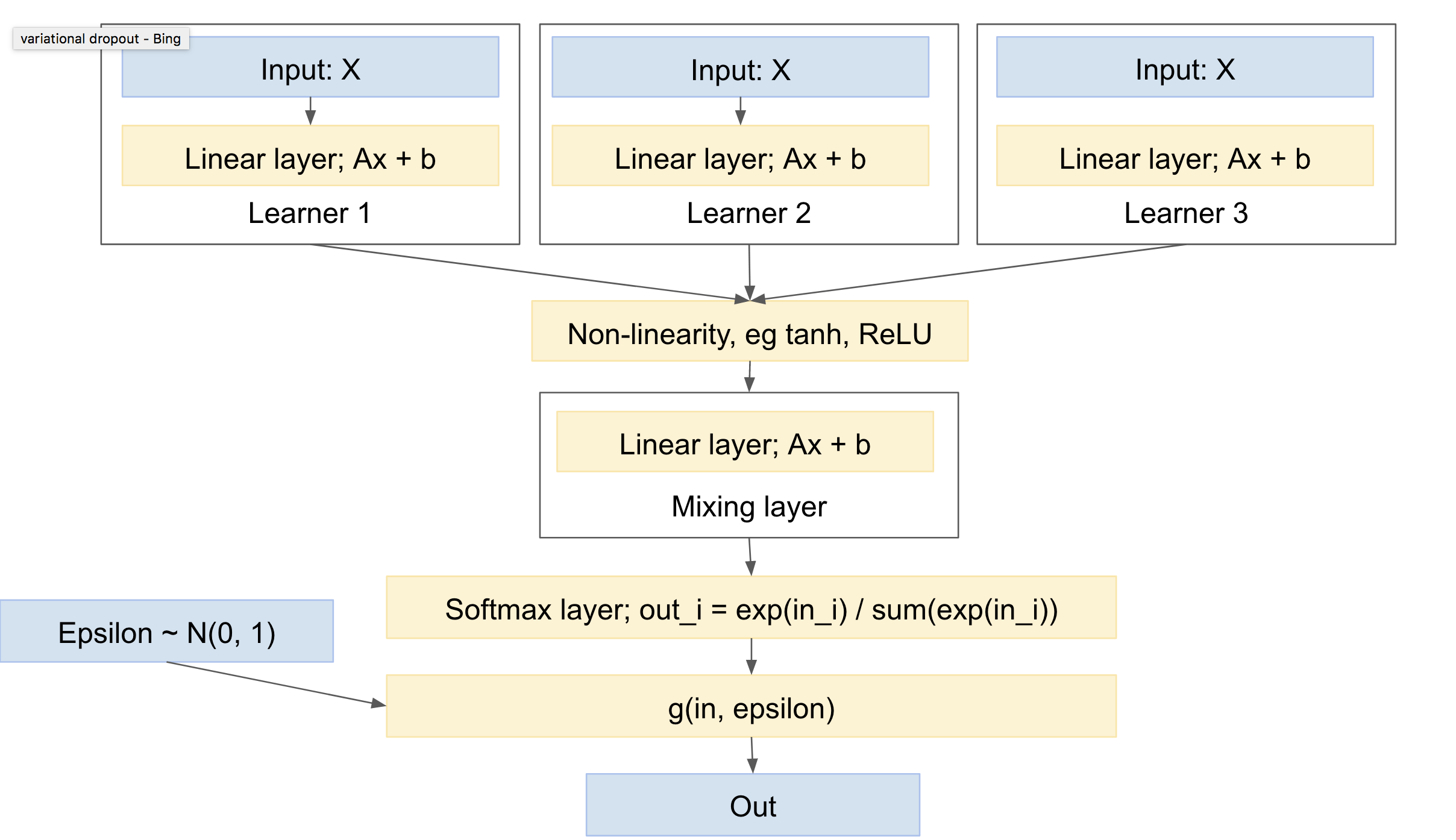 This then has the following characteristics:

Note in passing that this is not the only way of combining the learners. We could also combine them in more of a 'highway' type fashion, somewhat like boosting, something like: 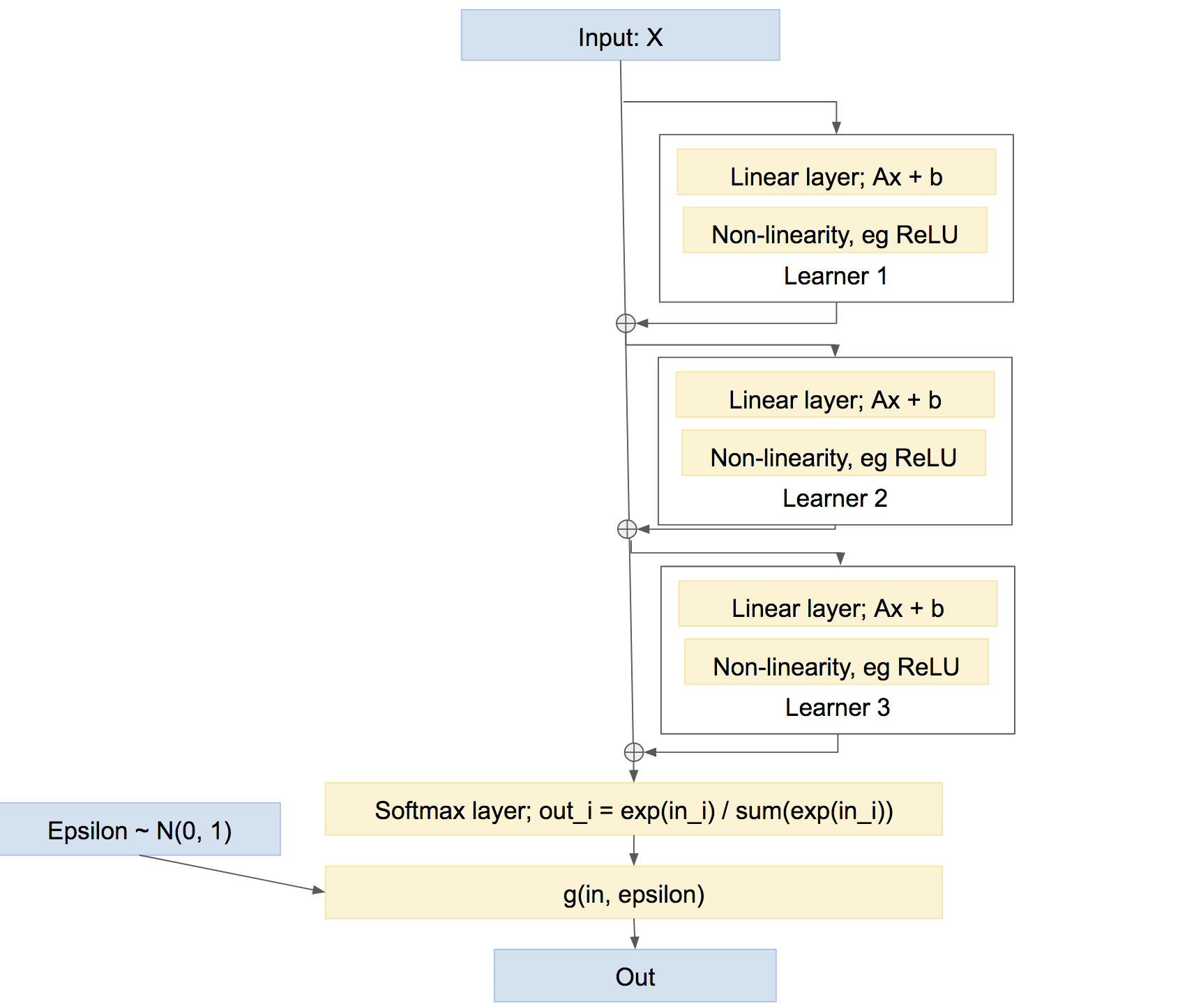 In this last network, each learner learns to fix any issues caused by the network so far, rather than creating its own relatively independent prediction. Such an approach can work quite well, ie Boosting, etc.

Not the answer you're looking for? Browse other questions tagged bayesian ensemble dirichlet-distribution or ask your own question.