Forecasting with annual data that has a rolling quarter

I want to fit an ARIMA model for forecasting on a quarterly basis, but my data is a rolling year, updated quarterly, how can I use this most effectively? I'm really interested in the best estimate of the future quarterly value I can get.

On the one hand I'm concerned about the "artificial" serial correlation due to the overlap in quarters, also that the averaging across the quarters is smoothing the series relative to its quarterly counterpart. On the other, throwing out the data seems like a waste of information. Just to clarify, the rolling years go: Jan 2004-Dec 2004, Apr 2004-Mar 2005 etc.

A few thoughts on this so far:

Take, as an example, employment data from the UK Annual Population Survey, here I've got employment and unemployment data for men and women in London, aged between 16 and 24. The plots here are male employment, but you can run the others in the code provided. (I've just put up one comparison to keep things clear.)

I forecast the data below using the rolling annual series and again using only the complete years from Jan-Dec with no overlapping quarters (so, an annual series). In the latter case there's not much to fit a model with, and the forecasts are clearly a lot simpler. It seems preferable to at least use the additional information and be careful about units (that what's being forecasted is the rolling year for the next period, not the next quarter). However both are really more like annual forecasts as the quarterly volatility is being smoothed out. 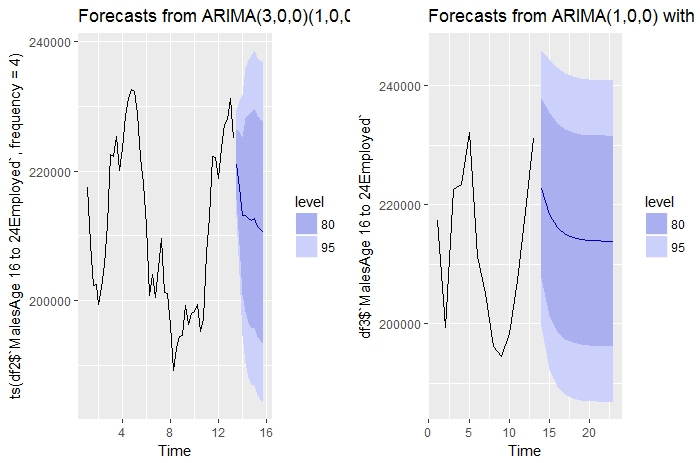 Browse other questions tagged time-series forecasting arima overlapping-data or ask your own question.