Should Kevin Durant be benched?

Kevin Durant is a world-class basketball player. He averages roughly 2 fouls for every 40 minutes of game play.

Per NBA rules, you must stop playing after picking up 6 fouls. Supposing Kevin Durant has 4 fouls with 20 minutes remaining in a game:

a) if he tries to play all 20 remaining minutes, what are the odds he acquires two more fouls and has to leave the game?

b) if he were to sit on the bench for 5 minutes (leaving 15 remaining), then what would the odds be?

c) if not 5, is there an ideal number for B in generating a greater likelihood of attaining more minutes than A?

There has actually been some research on this(!). Here's a paper by Maymin et al. (2012), (SSRN Link). They actually look at win-loss statistics instead of just trying to maximize the number of minutes a player plays. They argue that:

There's a shorter piece of Slate, which is where I found the original reference. Enjoy!

If we stick rigidly to the assumption "any minute is as likely to draw a foul as the next" then we can model this simply as a Poisson process. The results are shown in the figure below. 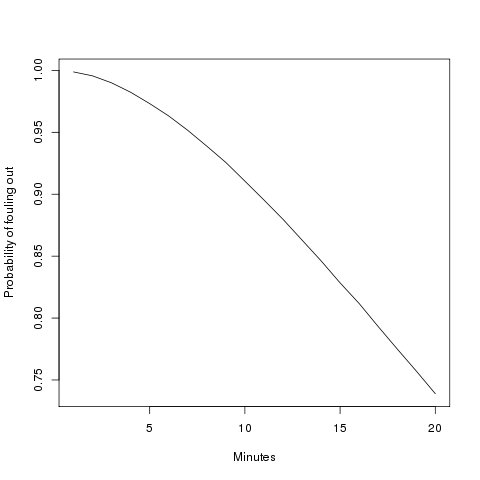 The vertical axis shows the probability that Durant has not been fouled out after playing the number of minutes shown on the horizontal axis.

Reading off the numbers at each time asked, there is a 74% probability of Durant going the distance if he attempts to play all 20 minutes. If he is benched for 5 minutes, he will only be able to play for a maximum of 15 minutes and the probability he will not foul out in that time increases to 83%.

As for part c), there is no trade off involved. Durant should never be benched if the goal is to maximise the number of minutes played.

For what it's worth I don't think that the assumption of fouls being a Poisson process is true, but then the result of the analysis would entirely depend of what other assumptions are being made.