Hot deck imputation, ''it preserves the distribution of the item values'', how can that be?

I read in this link, under section 2, first paragraph about hot deck that ''it preserves the distribution of item values''.

I do not understand that, if one and the same donor is used for a lot of recipients, then this may distort the distribution or do I miss something here ?

Also, the result of Hot Deck imputation must depend on the matching algorithm used to match the donors to the recipients ?

Hot-deck imputation of missing values is one of the simplest single-imputation methods.

The method - which is intuitively obvious - is that a case with missing value receives valid value from a case randomly chosen from those cases which are maximally similar to the missing one, based on some background variables specified by the user (these variables are also called "deck variables"). The pool of donor cases is called "deck".

In the most basic scenario - no background characteristics - you might declare the belonging to the same n-cases dataset to be that and only "background variable"; then the imputation will be just random selection from n-m valid cases to be donors for the m cases with missing values. Random substitution is at the core of hot-deck.

To allow for the idea of correlatedness influencing values, matching on more specific background variables is used. For example, you may want to impute the missing response of a white male of 30-35 yrs range from donors belonging to that specific combination of characteristics. Background characterics should be - at least theoretically - associated with the analyzed characteristic (to be imputed); the association, though, should not be the one which is the subject of the study - otherwise it comes we are doing a contamination via imputation.

Hot-deck imputation is old still popular because it is both simple in idea and, at the same time, suitable for situations where such methods of processing missing values as listwise deletion or mean/median substitution will not do because missings are allocated in the data not chaotically – not according to MCAR pattern (Missing Completely At Random). Hot-deck is reasonably suited for MAR pattern (for MNAR, multiple-imputation is the only decent solution). Hot-deck, being random borrowing, does not bias marginal distribution, at least potentially. It, however, potentially affects correlations and biases regressional parameters; this effect, however, could be minimized with more complex/sophisticated versions of hot-deck procedure.

A shortcoming of hot-deck imputation is that it demands the above mentioned background variables be certainly categorical (because of categorical, no special "matching algorithm" is required); quantitative deck variables - discretize them into categories. As for the variables with missing values - they can be any type, and this is the asset of the method (many alternative forms of single imputation can impute only to quantitative or continuous features).

Another weakness of hot-deck imputation is this: when you impute missings in several variables, for example X and Y, i.e. run an imputation function once with X, then with Y, and if case i was missing in both variables, the imputation of i in Y will not be related with what value had been imputed in i in X; in other words, possible correlation between X and Y is not taken into account when imputing Y. In other words, imputation is "univariate", it doesn't recognize potential multivariate nature of the "dependent" (i.e. recipient, having missing values) variables.$^1$

Do not maluse hot-deck imputation. Any imputation of misssings is recommended to do only if there is no more than 20% of cases are missing in a variable. The deck of potential donors must be large enough. If there is one donor it is risky that if it an atypical case you expand the atypicality over other data.

Selection of donors with or without replacement. It is posssible to do it either way. In no-replacement regime a donor case, randomly selected, can impute value only to one recipient case. In allow-replacement regime a donor case can become donor again if is randomly selected again, thus imputing to several recipient cases. The 2nd regime may cause severe distributional bias if the recipient cases are many while donor cases suitable to impute there are few, for then one donor will impute its value to many recipients; whereas when there is a lot of donors to choose from, the bias will be tolerable. The no-replacement way leads to no bias but may leave many cases unimputed if there are few donors.

Adding noise. Classic hot-deck imputation just borrows (copies) a value as is. It is, however, possible to conceive of adding random noise to a borrowed/imputed value if the value is quantitative.

Partial match on deck characteristics. If there are several background variables, a donor case is eligible for random choice if it matches some recipient cases by all the background variables. With more than 2 or 3 such deck characteristics or when they contain many categories that makes it likely not to find eligible donors at all. To overcome, it is possible to require only partial match as necessary to make a donor eligible. For example, require matching on k any of the total g of deck variables. Or, require matching on k first of the list g of deck variables. The greater has occured that k for a potential donor the higher will be its potentiality to be randomly selected. [Partial match as well as replacement/noreplacement are implemented in my hot-dock macro for SPSS.]

$^1$ If you insist on taking account of that, you might be recommended two alternatives: (1) at imputing Y, add the already imputed X to the list of background variables (you should make X categorical variable) and use a hot-deck imputation function which allows for partial match on the background variables; (2) extend over Y the imputational solution which had emerged in imputation of X, i.e. use the same donor case. This 2nd alternative is quick and easy, but it is the strict reproduction on Y of the imputation having been done on X, – nothing of independence between the two imputational processes remains here - therefore this alternative is not good.

It is possible to do a "constrained" version of hot-deck imputation which takes into account correlations or associations between the imputation variables (variables with missing values) themselves, trying to maintain those correlations. One of possible ways to do it is to arrange these variables as a second and special set of background variables (after binning, if necessary). [I've programmed such imputation for SPSS, you might want to read the algorithm in "Impute missing data" Word document downloadible on my web-site.] 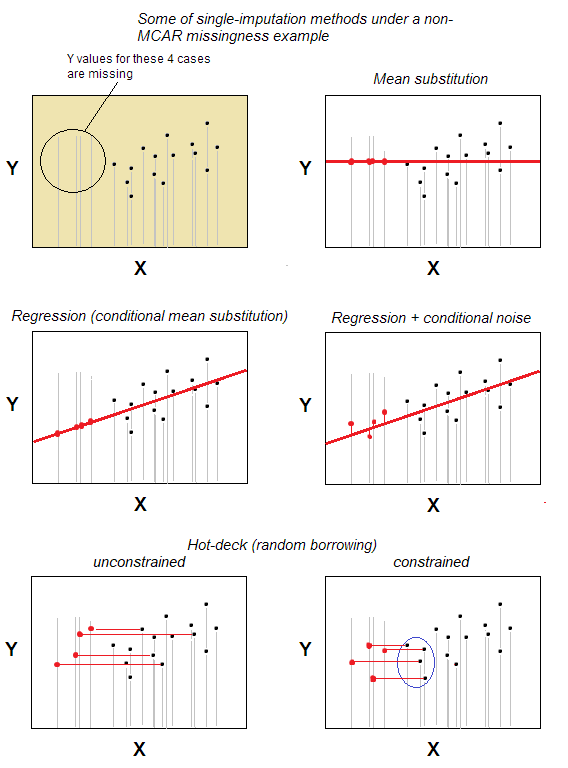 24
What are the disadvantages of using mean for missing values?
1
Deciding between Multiple Imputation and Hot-Deck Imputation