I am working on a Capacity Planning assignment and I have read some books. This is specifically about distributions. I use R.

I have this diagram. 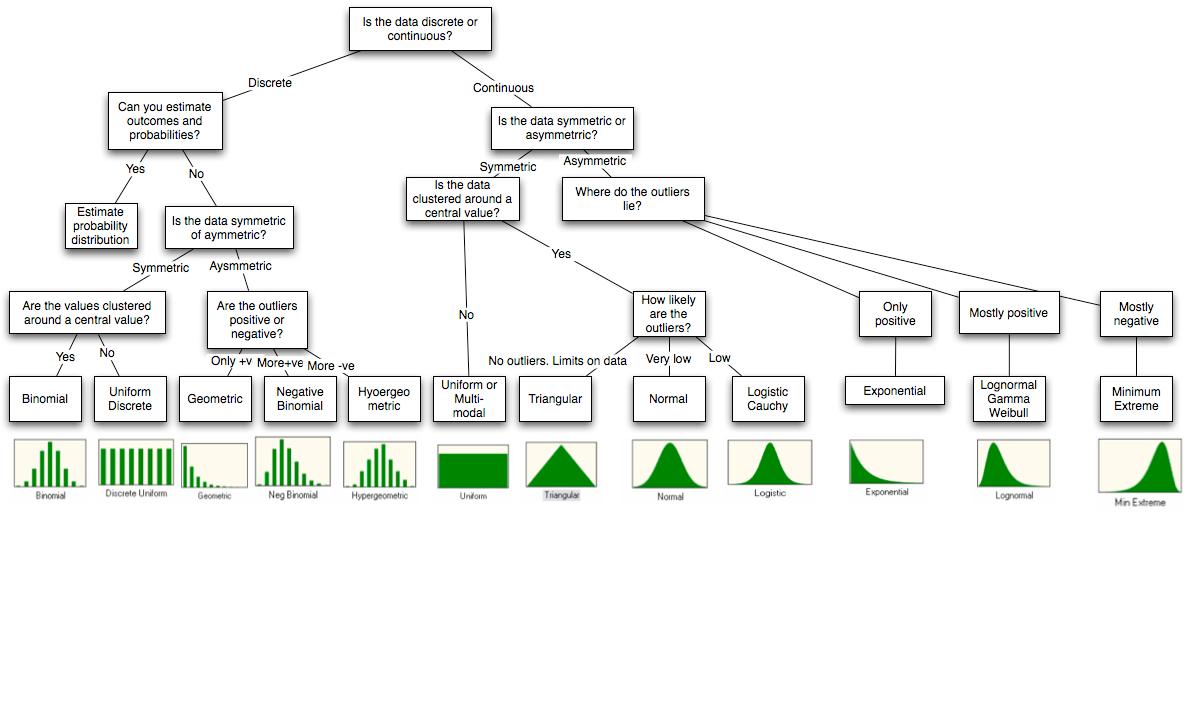 Please consider these as beginner's questions. Are there books or material that deal with these types of simulations ?

THe diagram is from the end of the paper http://people.stern.nyu.edu/adamodar/pdfiles/papers/probabilistic.pdf.

Goodness of fit techniques I have come across

I am not sure what the interpretation or next steps should be if I find that my distribution is normal or exponential etc. What does it allow me to do? Prediction? Hope this question is clear.

Exponential delays will induce queue fluctuatuions as per my Capacity Planning book by Neil Gunther. So I know that one point.

I will answer your point about simulations with R because this is the only one I am familiar with. R has a lot of builtin distributions which you can simulate. The logics of naming is that to simulate a distribution called dis the name will be rdis.

Below are the ones I use most often

You can find some complements in Fitting distributions with R.

Addition: thanks to @jthetzel for providing a link with a comprehensive list of distributions and the packages they belong to.

But wait, there's more: OK, following @whuber's comment I'll try to address the other points. Regarding point 1, I never go by a goodness-of-fit approach. Instead I always think about the origin of the signal, like what causes the phenomenon, is there some natural symmetries in what produces it etc. You need several book's chapters to cover it so I'll just give two examples.

In those examples, when I say visually, I mean that I use a Q-Q plot

Point 3, also deserves several book's chapters. The effects of using a distribution instead of another are limitless. So instead of going through it all, I will continue the two examples above.

Not the answer you're looking for? Browse other questions tagged distributions simulation or ask your own question.