Equal Joint Distributions: correlation between them?

A random triangle is formed in some way, such that all pairs of angles have the same joint distribution. What is the correlation between two of the angles (assuming that the variance of the angles is nonzero)?

Is it true that, since all will have the same joint distribution, tha5t the correlation between two of the angles is 1? They are identical-- no?

Let the angles be $A,B,C$. About the only fact about them that's useful is that they sum to a constant (assuming these are Euclidean triangles), which I will call $\pi$:

Correlation is computed in terms of first and second moments. Since all pairs of angles have the same joint distribution, they all have the same bivariate moments. This enables us to simplify the notation: write

for their common expectation,

for their common second moment, and

From $(1)$, its square, and linearity of expectation, we may obtain information about these moments:

Finally, the correlations must all be the same, too. They are fractions where the numerator is the common covariance

The common correlation therefore is

The question has been reduced to this:

Let's subtract off suitable multiples of $\mu_1^2$ to obtain a relationship between the expressions that appear in $(4)$:

Consequently, dividing the right hand side by $6(\mu_2 - \mu_1^2)$ (which, being six times the common variance, is assumed nonzero), we learn that

To demonstrate that the angles do not need to be constant, an example of such a distribution is $\pi$ times a Dirichlet$(\alpha,\alpha,\alpha)$ distribution for any $\alpha\gt 0$. Here are 100 such triangles generated according to that distribution with $\alpha=1$, oriented with $A$ at the left, $B$ at the right, and $C$ at the top of each one. Each has unit perimeter. 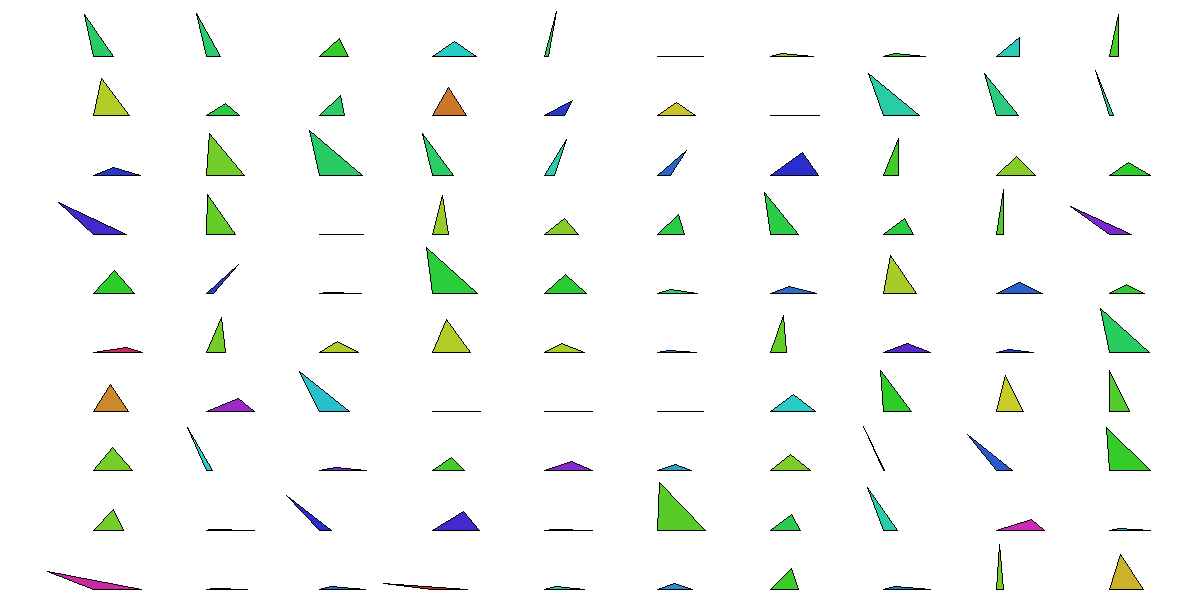 Not the answer you're looking for? Browse other questions tagged probability correlation joint-distribution or ask your own question.