I'm having trouble understanding what the parameter estimates and their standard errors tell us when evaluating a model. For example, here are the estimates for an Arima(2,1,0) model that I cooked up in R:

I've heard things like "the ar1 is significant because its estimate is more than twice the s.e.", but I don't understand why that criteria makes it "good". By this logic, the inclusion of a second parameter does not look good.

So how exactly are the parameters distributed, and how do we interpret their estimates and standard errors?

The idea is that there is some unknown but fixed underlying data generating process (DGP), governed by an unknown but fixed ARIMA process. The specific time series you observe is a single realization of this process. If you now went and sampled many time series arising from this DGP, then they would all look somewhat different, because of different innovations. However, you could fit an ARIMA model to all of them. Then you would of course get different AR parameter estimates for each time series. 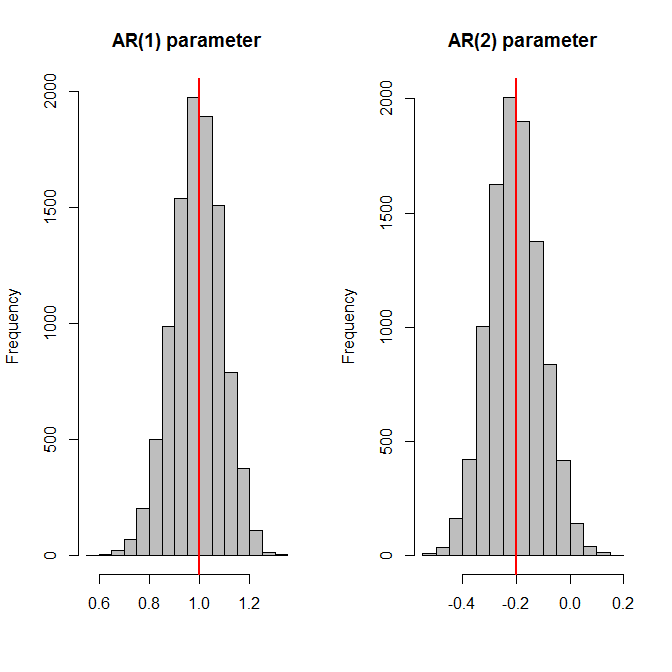 Note that I simulate with a zero mean and explicitly tell arima() to not use a mean. And that the entire exercise crucially depends on the assumption that we know the ARIMA orders with certainty! If we first need to select the correct order, then everything will be biased, and the standard errors lose their interpretation. (Yes, this kind of makes all this a somewhat theoretical and academic exercise.)

If you want to dive more deeply into the maths, any mathematical time series textbook should do well. (Anything with "business" in the title will likely gloss over these details.) I recently skimmed Time Series: Theory and Methods by Brockwell and Davies (2006), which looked pretty good, but I can't recall offhand whether this topic was treated at any depth there.

Not the answer you're looking for? Browse other questions tagged arima standard-error or ask your own question.

3
Understanding standard errors in logistic regression
6
Estimating standard error of parameters of linear model fitted using gradient descent
2
Does dummy intervention variable (pulse or step) must be differenced when it is added to ARIMA model?
1
Why does my ARMA forecast get smaller over time?
1
ARIMA + Rolling Window
1
Result interpretation for Regression With ARIMA Errors