Say we have two MCMC chains, acquired through Gibbs sampling methods, the two chains are sampled from the un-normalized beta distributions of our thetas, for the purpose of determining the most probable parameter of their corresponding Bernouli distributions. How now do we determine how different the two chains are and if a player is more likely to make their second shot given they have made their first.

In Kruschke's book the differnce of the two chains are taken.

If we subtract the two chains, chain1 - chain2

I understand that 'significance' testing is a problematic area in bayesian inference but how do we determine if the two samplings from our un-normalized distributions are for lack of a better word significant.

Taking the difference of two Markov chains produced by the same (?) Gibbs sampler does not tell us much about the stationary distribution of these Markov chains and about their convergence properties. It will mostly reflect on the noise at each iteration and on the impact of the starting values. The relevant thing to check in my opinion is whether the stationary distributions of both chains are the same, which can be evaluated by averages and frequencies. For instance, here are two chains created by Gibbs sampling from two different starting points

The plot of the difference (right) does not tell much about the different behaviour of the two chains (left): 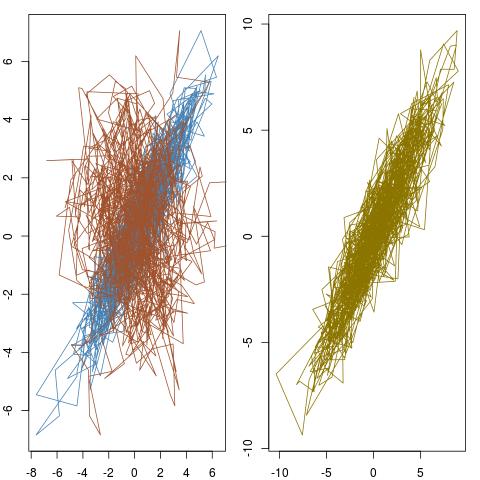 Not the answer you're looking for? Browse other questions tagged bayesian markov-chain-montecarlo beta-distribution or ask your own question.

9
MCMC to handle flat likelihood issues
0
MCMC-Draws from different MCMC- chains
4
Problem interpreting the Beta distribution
2
Use Bayesian modeling & PyMC to find players with similar skill levels to match for game
17
How do ABC and MCMC differ in their applications?
3
A comparison between the convergence of Metropolis-Hastings and INDEPENDENT Metropolis-Hastings algorithm