I'm just dipping my toe into correlation vs causation, so forgive me if I butcher some of the concepts here.

To get a better understanding of these concepts from data, I would like to simulate data under a correlational assumption and a causational assumption. I'm not sure where to start, but here's where I'm headed.

For correlation, this is fairly easy.

For causation, my thoughts were:

In my mind, this creates a causal relationship, but I'm sure I'm wrong. Regardless, the result is a data matrix that has some correlation - different variables from the same first distribution with parameters drawn from the second distribution may have a correlation but they are not related to each other causally.

I appreciate any comments/suggestions regarding how to approach this.

All this is easier with a theory of causality. For example, let's use here the Structural Causal Models (which includes the Potential Outcomes) approach.

A Structural Causal Model (SCM) is triplet $M = \langle V, U, F\rangle$ where $U$ is a set of exogeneous variables, $V$ a set of endogenous variables and $F$ is a set of structural equations that determines the values of each endogenous variable. The structural equations are in the sense of assignments not equalities. For example, consider the simple structural equation $Y = X^2$. This is meant to be read $Y\leftarrow X^2$, in the sense that if I experimentally set $X=2$ then this causally determines the value of $Y = 4$ but experimentally setting $Y = 4$ does nothing to $X$. The asymmetry is important/fundamental in causality: rain causes the floor to be wet, but making the floor wet does not cause rain.

So our causal model can be thought as functional relationships among variables and we are considering these relationships as autonomous. You can think of it as an idealized representation of the real world, where the variables $V$, the endogenous variables, are what we choose to model, and the variables $U$ are the aspects we chose to ignore. Since we chose not to model the $U$, what we usually do is to represent our ignorance about $U$ with a probability distribution $P(U)$ over the domain of $U$, giving us a probabilistic SCM which is pair $\langle M, P(U) \rangle$. Notice this means that causal relationships are ultimately functional relationships, therefore causal relationships may or may not translate to specific probabilistic dependencies. Finally, every causal model can be associated with a directed (acyclic) graph $G(M)$.

Hence, one way to simulate from a probabilistic causal model is by specifying: (i) the endogenous variables $V$ you are going to model; (ii) the exogenous variables $U$ which are usually the "disturbances", along with their joint probability distribution; and, (iii) the (causal) structural relationships among the variables. It might be easier to start this process qualitatively by first drawing the causal DAG with the main features that you want to illustrate and then add the details of the simulation (functional forms) later.

To see how this can be easily done in practice, let's simulate a simple causal model that illustrates simpson's paradox (for more see Pearl). Suppose our model $M$ is given by the following causal DAG, where the variables in parenthesis are "unobserved" and each variable has an associated exogenous disturbance $U$ which is omitted for convenience: 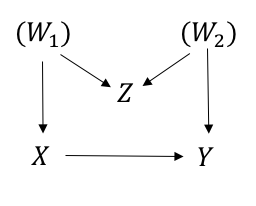 More specifically we will assume the following structural equations $F$:

Finally, assume all disturbances in $U$ are independent standard normal random variables. Now it's easy to simulate from our causal model. In R for instance:

This example is interesting because if you run the regression $Y \sim X$ you get $1$:

But if you further "control" for $Z$, which is a pre-treatment variable correlated with both $X$ and $Y$ --- and some people still erroneously would say it's a confounder --- you will actually see a sign reversal of the estimate and get $-1$:

In this example, since we simulated the data, we know the true causal effect is $1$ which is captured by the first regression. But you can only know that if you know the true causal structure. There's nothing in the data itself that tells you which one is the correct answer. Hence if you simulate this and give to a researcher only the variables $x$, $y$ and $z$ he can't tell the right answer just from looking at the correlations. If you want further play/simulate causal models with multi-stage Simpson's paradox reversals, you can check it here.

First, causality cannot be observed in the output. Only correlation.

You can imagine two functions that output exactly the same $(x_1,x_2)$ pairs (given the same random seed). Yet you could interpret one function as creating causally related pairs, the other not. It depends on how the code is written (or how you interpret it), not what it actually computes as a final result.

Causality as defined with DAGs requires the possibility of intervention on one of the two variables at least as a thought experiment. Imagine it as a debugger: you interrupt your program just after the first variable was computed, reset it to a certain value, and then restore execution. Will this impact the second variable?

In the way you explain the process (second case) call:` 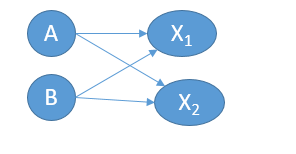 Not the answer you're looking for? Browse other questions tagged correlation simulation causality or ask your own question.

147
Does causation imply correlation?
33
Introduction to causal analysis
18
Confounder - definition
23
Which Theories of Causality Should I know?
10
Hiding a Regression Model from Professor (Regression Battleship)
2
Generate Variables from Causal Structure for Simulation with Binary/Indicators