I'm reading "The Elements of Statistical Learning", in Fig. 2.8 there is a simulation example highlighting curse of dimensionality with $1$-NN (Nearest Neighbors). In this example the variance should dominate over bias when dimension is large. The problem is as follows.

The aim is to get the behavior of bias and variance when $p$ is large and training sample is fixed to $N=1000$.

I don't understand why the variance should dominate heavily bias here, as shown in the following figure (on the right). 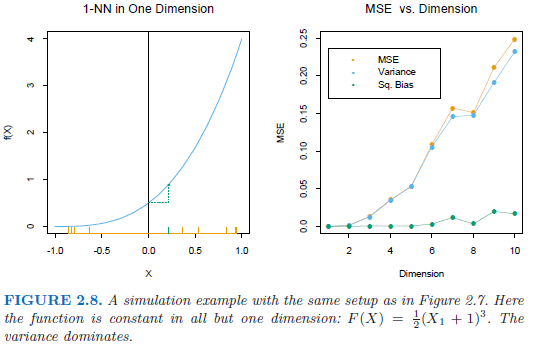 Here my understanding of the problem:

So we obtain the bias and variance as follows:

Browse other questions tagged self-study k-nearest-neighbour high-dimensional bias-variance-tradeoff or ask your own question.

6
How can increasing the dimension increase the variance without increasing the bias in kNN?
3
Source for this claim: “In high dimensions, all data are multicollinear.”
2
Bias and Variance, Overfitting and Underfitting
6
Find the MSE of a true response and its predicted value using OLS estimation
1
How to verify the bias-variance decomposition using a simluated experiment
3
Why is there a bias variance tradeoff? A counterexample
2
Ridge Regression: how to show squared bias increases as $\lambda$ increases
2
Rigorous statement of expectations for the bias-variance trade-off