Is it an easy homework to show that the two adjustments lead to the same causal effect of $X$ on $Y$? 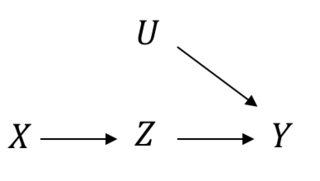 Let's call the original observational distribution $P$ and the post-intervention distribution $P^*$. Our goal is to express $P^*$ in terms of $P$. Notice that in $P^*$ we have that $U \perp X$. Also, the pre interventional and post interventional probabilities share these two invariances: $P^*(U) = P(U)$ and $P^*(Y|X, U) = P(Y|X, U)$ since we did not touch any arrow entering those variables in our intervention. So:

The derivation of the front door is a bit more elaborate. First notice that there's no confounding between $X$ and $Z$, hence,

Also, using the same logic for deriving $P(Y|do(X))$ we see that controlling for $X$ is enough for deriving the effect of $Z$ on $Y$, that is

Where I'm using the prime for notation convenience for the next expression. So these two expressions are already in terms of the pre-intervention distribution, and we simply used the previous backdoor rationale to derive them.

Hence, the two adjustments give you the same post-interventional distribution on this graph, as we have showed.

Re-reading your question it occurred to me you might be interested in directly showing that the right hand side of the two equations are equal in the pre-interventional distribution (which they must be, given our previous derivation). That's not hard to show directly too. It suffices to show that in your DAG:

Not the answer you're looking for? Browse other questions tagged self-study causality graph-theory dag or ask your own question.

33
Under which assumptions a regression can be interpreted causally?
18
do(x) operator meaning?
6
Causality: Structural Causal Model and DAG
6
conditional and interventional expectation
4
Understanding Judea Pearl's Back-Door Adjustment Formula
1
Whats on the causal path?
1
What justifies the multiplication step in the proof of the front-door adjustment?