If in this problem I regress $x$ on $y$ instead than $y$ on $x$, do I need to use an error-in-variables model?

I was trying to write an answer for this question:

Basically the OP has lots of data of Amplification vs Voltage (see the image below) for different tested devices and would like to estimate, for each device, the Voltage given an Amplification = 150. 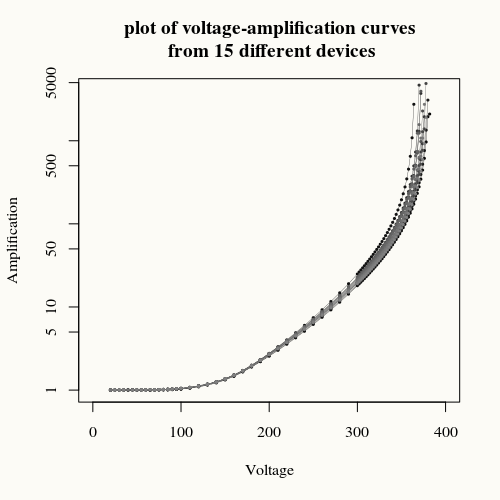 Apparently, in literature there's a physical model which has been used for fitting data from these devices:

However, the model has Amplification as the dependent variable and Voltage as the predictor. This means that if we fit a nonlinear mixed model to the data with nlmer (for example), then we will get confidence intervals on the Amplification given Voltage, not the other way around.

I thought of simply regressing Voltage on Amplification, instead, i.e., invert the above relationship to get

and fit a nonlinear mixed model with nlmer doing something like

(Serial_number is the tag that identifies each APD device: think of it as a Subject variable).

The direction of regression may be important to prevent attenuation bias.

Your question about the regression $x \sim y$ versus $y \sim x$ has many angles. A problem which you might encounter is regression attenuation or regression dilution.

It happens if the 'independent variable in the regression' has a large error.

The underlying mathematics does not care about the direction of the causal relationship, or which variable was controlled for, it cares about the errors in the variables.

The variable that was controlled in the experiment, Voltage in this case, can also have a large error, even if it was "controlled". (you do not really set the voltage, you set some button or switch that controls the voltage and eventually you measure the voltage by reading it from a voltmeter or something). So this left hand side situation with the $\epsilon_x$ ignored $(y+\epsilon_y) = a + b(x)$ may be wrong and cause problems (that is attenuation).

'In this problem' you do not have to worry about direction of regression and attenuation.

In this problem there is not a large error, or at least not much noise. The curves are smooth with little jitter. If there is an error then it is a systematic error, but such errors are not linked to regression attenuation (which is about the random errors). Also such systematic errors have little to do with other issues in the mathematics. Except for possibly making some inverse regression ill-posed due to crossing some asymptote or creating negative values in roots logs etcetera.

These systematic errors are more like something that should be dealt with on the practical side (testing equipment, performing good calibration, etcetera).

Much more important is to use the proper model.

If one does wish to fit a reasonable curve then I believe it would be better to dig deeper into the mechanics of the system and use knowledge of the device to create a good curve fit, rather than some polynomial or simplistic literature curve, which are "just" experimental relationships which have little value for generalization and provide little information on the mechanics and inner workings of the devices (which may not be the prime goal of the experiments, but would be a bonus, and at least would increase the robustness of the fitting method).

It is hard to do this work by just gazing at the raw data without much information of the system, however, I was able to get a reasonable fit for a differential equation with two power terms. 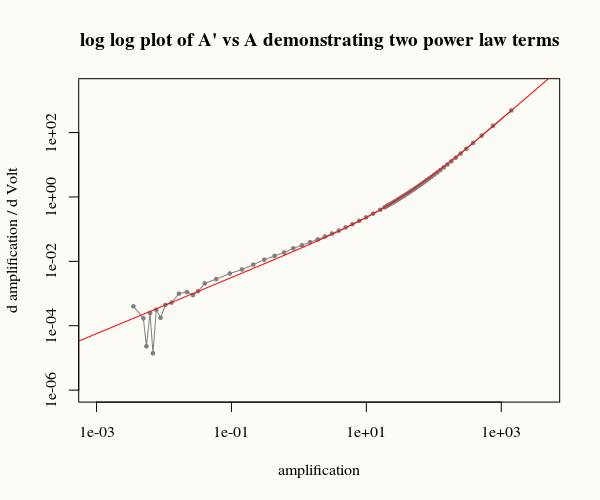 This is a separable equation and can be solved both numerically (easy, e.g. by deSolve in R) or analytically (although this seems to involve the hypergeometric function $_2F_1$ which is not easy to fit directly).

Example of fitting with a differentiated function

Upon request the code to fit with the differentiated function.

I want to stress two points:

Image generated by this code: 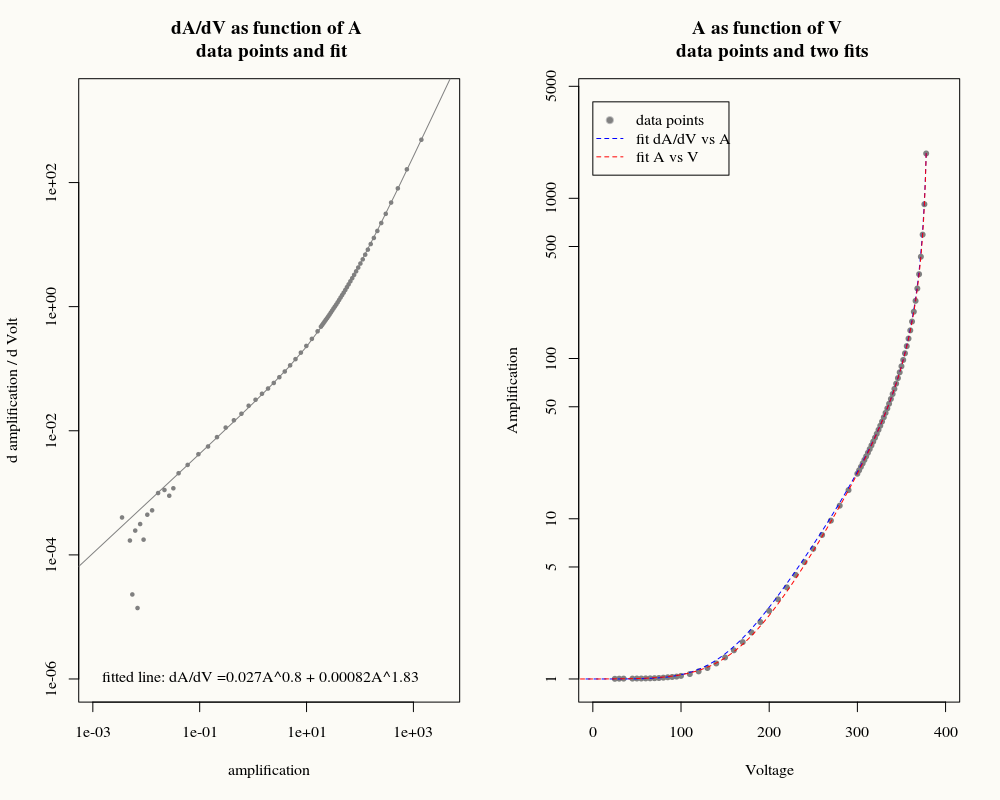 Not the answer you're looking for? Browse other questions tagged regression mixed-model nonlinear errors-in-variables or ask your own question.

2
Restricting data range considerably changes my linear mixed model fit - how can I make sure my model is accurate?
1
Selection of data range changes coefficients too much in lmer (inverse regression)

4
Quantifying the degree of consistency of two fitted curves
8
Linear regression with shot noise
1
Regression and variable with errors modelling problem
3
How to model repeated measurements for two different scenarios?
2
Have I correctly specified my lmer model for crossed/nested experiment?