How to prove that the probability of spurious correlation increases with random walk length?

I simulated pairs of random walks of length $T$, where $T$ ranges from $4$ to $200$ one million times for each value of $T$. For each simulated pair of random walks, I estimated Spearman's correlation coefficient $\hat{\rho}_{S}$, and calculated the $t$ test statistic corresponding to $H_{0}: \rho_{S} = 0$, and determined the (two-tailed) $p$ value from that $t$ test statistic. ‘Spurious correlation’ is a well known consequence of naïve application of correlation measures to such non-stationary (i.e. ‘integrated’ data) as illustrated in the graph below, which depicts the probability that a $p$ value was less than an $\alpha=0.05$ vs. the length $T$ of the random walk length of paired simulations of $y_{t}$. (Not shown are graphs for other values of $\alpha$ reflecting the same qualitative pattern.) 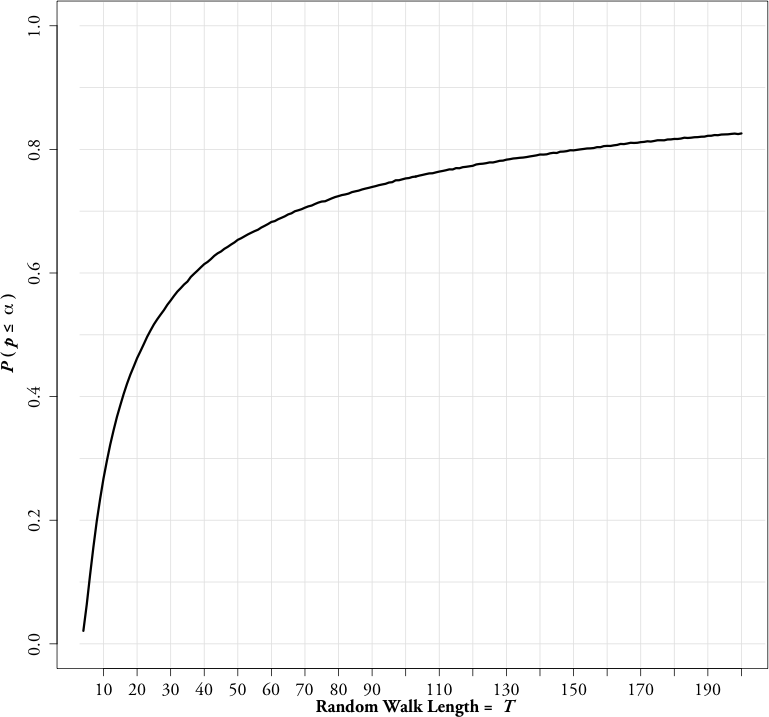 Can one prove that such a curve increases monotonically as $\boldsymbol{\lim_{T \to \infty}}$?
(Or prove that it does not.)

Obviously, my approach is numeric, and I should be considered a newb for analytic answers. The distribution of $p$ values under a true $H_{0}$ should be uniform from 0 to 1 (and ideally cleave to a horizontal line at the value of $\alpha$ on the same kind of graph as above), so I assume that I am asking how to prove that this distribution is increasingly non-uniform as $T$ increases.

There's been a fair amount of work on this kind of problem in the econometrics literature -- unsurprisingly.

Phillips (1986) gives information about the asymptotic behaviour of $R^2$,

and $V$ and $W$ are independent Wiener processes; at another point Phillips explains $\mathbf{\Rightarrow}$ (which should be able to be carried over, mutatis mutandis):

When both variables are I(1), the density of R is close to a semi-ellipse with excess frequency at both ends of the distribution and, consequently, values of R well away from zero are far more likely here than in [the case of two I(0) series].

(I didn't get hold of Bannerjee et al)

I don't agree with their characterization of the shape of the distribution of R; convergence to the limiting case seems to be very rapid, and the shape is almost flat over the middle half of the range: 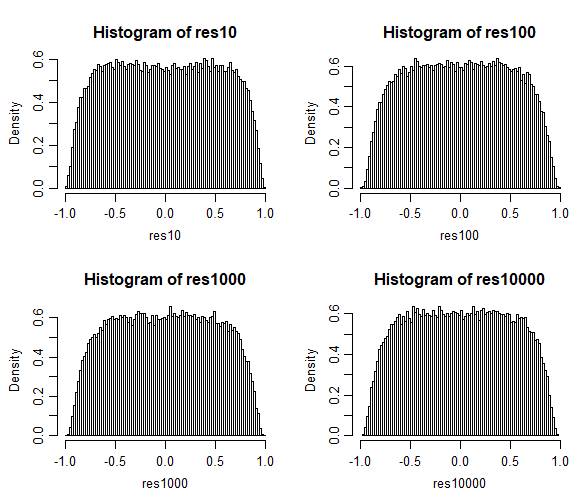 Those are histograms of the distribution of the correlation of independent $I(1)$ series (cumulated Gaussian) of different lengths -- $n=10,100,1000,10000$, with 100,000 values generated for each case. We see that the distribution hardly changes between 10 and 100, and seems to be essentially stable after that. It looks to me like a slightly rounded off symmetric trapezium (/trapezoid), flat in the middle half of the range.

Meanwhile the null distribution (under the assumption of independent $I(0)$ series) would be $N(0,\frac{1}{n})$; the standard deviation decreases as $1/\sqrt{n}$; this means more and more of the above distribution is in the critical region as we take longer series.

Here's the corresponding histograms for the Bernoulli random walk and Spearman correlation: 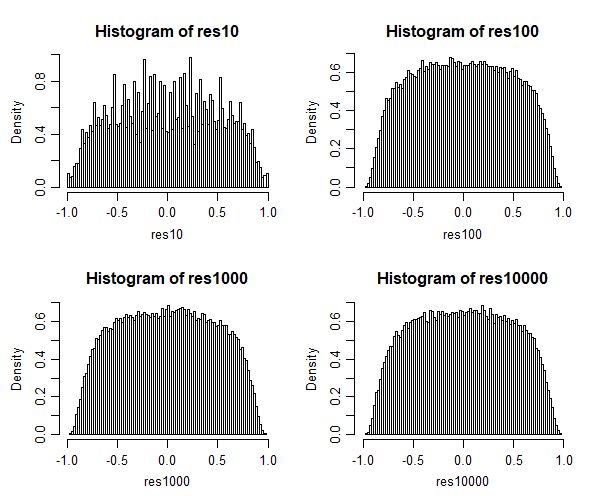 The equilibrium distribution looks about the same as for the Pearson/Gaussian case, but is perhaps just a little "rounder" (less flat in the middle half).

Nevertheless, even if the distribution is very slightly different, the result will be the same -- both tests will see a very similar increase rejection rate with sample size.

So for random walks we have this stable distribution that settles down pretty quickly with sample size and then stays the same, but the standard deviation of the null distribution of the correlation coefficient shrinks as $1/\sqrt{n}$ so more and more of this distribution will lie in the rejection region as $n$ increases.

Looked at another way -- under the null hypothesis, $\sqrt{n}\,r$ is approximately standard normal, but because the distribution of these correlations don't shrink around zero as sample size increases, $\sqrt{n}\,r$ gets wider with $n$ -- less and less of it will lie within $0 \pm z_{1-\alpha/2}$ as $n$ increases.

However the published version has a number of printing issues so you may also want this working version to be able to get some of the details:
https://cowles.yale.edu/sites/default/files/files/pub/d07/d0757.pdf

Ok, I am gonna try and take whuber's advice to attend to the distribution of $\rho_{\text{s}}$. I do not have a mathematical statistics background, so gentle prodding me to make my thinking more rigorous is welcome.

Not the answer you're looking for? Browse other questions tagged mathematical-statistics random-walk spurious-correlation or ask your own question.