I have several time series of two variables over the course of one year (approx. 2.5k observations). I hypothesize one variable (x) acts as a potential predictor for the other variable (y). I looked for the period in which y is best described by x ("best" as in strongest Pearson), took the observations from just that optimal period, calculated the simple linear regression model and its parameters and predicted y upon all x. Hence, I have two y's over the same time series of one year - the observed and predicted, the latter being the result of the regression model calculated from the optimal period.

Now, I detected autocorrelation and heteroskedasticity in the data from the optimal period. For one example time series, see below the regression diagnostic plots and statistical test results inside them. 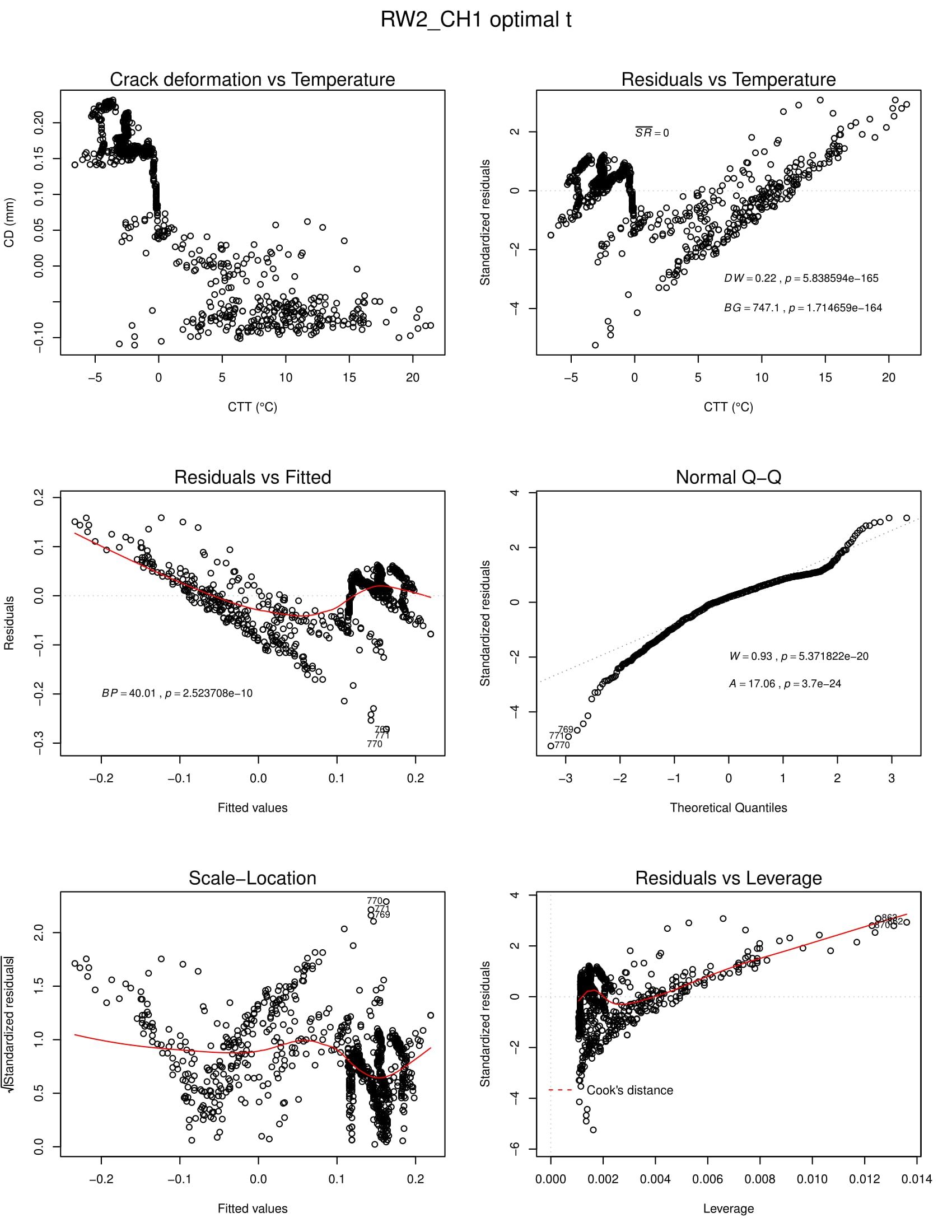 From the tests and visual inspection I can infer that there is autocorrelation and heteroskedasticity present in my data. I am somewhat stuck on how to proceed from here on. Especially, I would be glad about help on the following:

The scatterplot indicates that the relationship is not very well described by a linear regression model and may potentially better fit a gls model in the first place. However, I would like to consistently apply a linear model to all my time series, even though they might not very well explain the distribution of the data. That in itself, would be an interesting outcome.

I am using the R environment for my analyses.

We have seen residual plots such as yours when untreated deterministic effects are present. These might include hourly or daily effects. Care should be taken to identify and incorporate any needed effects like Pulses,Level Shifts,Seasonal Pulses and/or Local Time Trends . Needed ARIMA Structure suggested by model diagnostics should also be included. At that point consider testing for constancy of parameters over time as parameters may have changed OR testing for constancy of error variance over time . Non-constant error variance over time can be remedied by the TSAY test as described here http://docplayer.net/12080848-Outliers-level-shifts-and-variance-changes-in-time-series.html or the classic Box-Cox test . The TSAY test should be implemented first as it is the least intrusive transformation.

The correct Transfer Function identification procedure using pre-whitened cross-correlations in conjunction with the above should lead to a useful model. The process I have described here is fundamentally what I incorporated into AUTOBOX , a piece of software that I have helped to develop. You could attempt to program this yourself but it might be time consuming.

The ACF of the residuals from a tentative model is suggestive of the need to augment your current model with arima structure. The ccf of residuals from a tentative model and a prewhitened X variable suggests possible improvements in the TF structure. Yes to "see the initial lags" you use the CCF https://onlinecourses.science.psu.edu/stat510/node/75 and Why is prewhitening important?. It is literally a minefield of possible ways to do it rong which is why I automated the process. The automation doesn't guarantee optimality but it does clear the path. Advice from non-time series experts in this area should be studiously avoided as your problem can be daunting.

http://autobox.com/cms/images/dllupdate/TFFLOW.png is a start ... where one would add before forecasting checks for 1) constancy of parameters and 2) constancy of the variance of the error process . Now that you have a work statement (flow diagram) the next part is to implement it either manually or with creative productivity aids.

This is (somewhat) repetitive but ....

Not the answer you're looking for? Browse other questions tagged regression time-series autocorrelation heteroscedasticity or ask your own question.

6
Why is prewhitening important?
8
Multilinear regression vs. Time Series