I inspect a road network's condition every three years:

The rating system is from 0-20, 20 being perfect condition.

As far as I can tell, the deterioration curves (both the original and the revised) are primarily intended to be used to project the condition of a road right from it's initial construction.

The documentation of the revised deterioration curve hints that I can do this sort of thing:

The future condition can be estimated by considering the condition information available from inspections as well as the rate of deterioration provided by the models.

Although a pavement might, in reality, be a particular age based on its last rehabilitation, it may not be performing at that age. For example, a pavement that was reconstructed five years ago might be expected to be in good condition, but due to some unknown variable (e.g. construction errors), it might actually be in poor condition. This pavement would be performing as if it were an older age than it actually is.

Thus, those sections that have not been maintained or rehabilitated since their last inspection could be assigned a pseudo-age based on their condition at last inspection. This pseudo age can be easily calculated by rearranging the equation to solve for age given condition.

For example, a road section that [text removed] has been inspected and assigned a grade of 13 would have the following pseudo age using the new exponential model:

Once this pseudo age has been calculated, the predicted condition score at a particular point in the future can be predicted based on it. For example, if the condition at 20 years from the inspection was needed, it could be calculated by inputting an assumed pseudo age of 55 years into the model.

I can create a table of ages from 0-50, and use the function to predict condition:

I want to predict the future condition of my road from it's last known condition--going forward.

I could do this by simply appending the condition values from the deterioration curve, that are less than the last known condition, to my existing inspection values.

The age would not be from the deterioration curve, but instead is just a sequential list of numbers, starting at the last inspection.

From there, I can do analysis on the projected condition of the road. For example I can graph it: 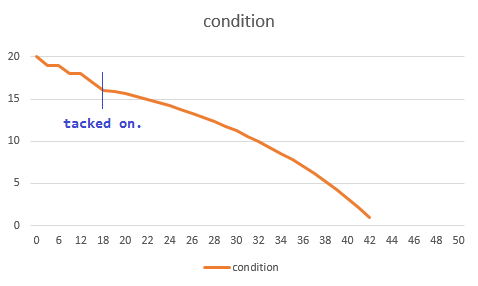 However, while I'm tempted to just say "job well done!" and go have a celebratory pint, I suspect that this might be a classic example of a non-stats guy completely butchering the numbers.

Is appending a portion of a deterioration curve to existing values appropriate/correct, according to stats theory?

If you wanted to put some probability and statistics into the question, there are two ways you could go. First, as I said above, we could try to account for the uncertainty in estimating the coefficient on age, i.e. the rate of decay. Another way we could go is we could hypothesize that the condition variable in the first equation you gave is actually the expected value of condition. That is that the equation you gave is not quite correct. The correct equation is:

With an additional assumption (called "independent increments") the final equation we wrote above could be re-derived as:

So, you might ask yourself, can I make a confidence interval for future condition? Can I say something like, "my expectation is that future condition at some specified future date will be 17, and I am 90% sure that future condition will be between 16 and 18." To do this, we need a model of the evolving random variable $\text{condition}_t$. Models like this are called "stochastic processes."

I don't think this is actually what you are after, so I will stop here, but what you would probably want to do to go further is to assume that $ln \left( 21 - \text{condition}_t \right)$ is a Poisson process (the most famous stochastic process). Then you could derive the confidence interval I mention above.

As an aside, the original formula has the unfortunate property that it produces negative numbers for $\text{condition}_t$ after a while. So, I'm wondering if that is really the right formula to use.